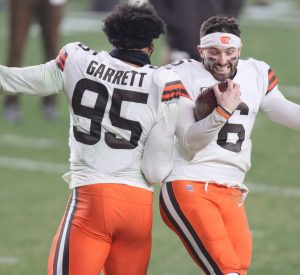 CLEVELAND, Ohio — The Browns’ dip into the free agency pool wasn’t quite as aggressive as it was a year ago, but it was a targeted approach to adding talent, especially on the defensive side of the ball.

Over the last few weeks, we’ve had the opportunity to hear from the team’s newest additions. Let’s take a look at some of the themes from what they had to say on Zoom call’s with local media.

Linebacker Anthony Walker saw the talent on the offensive side of the ball last year. He played against the Browns with the Colts.

“I knew they were a playoff team,” Walker said. “I talked to coach (Kevin) Stefanski and I told him, ‘When we played you guys last year, I told the guys in our locker room that is a great football team over there.’”

New defensive end Takk McKinley saw the change start happening early when he played the Browns back in 2018 at FirstEnergy Stadium. The Falcons lost, 28-16, in a game featuring a 92-yard run by then-rookie Nick Chubb. It was part of the Browns’ 5-3 finish to the season.

“We got our butts kicked pretty bad,” McKinley said. “That right there kind of let me know, ‘OK, this is not the same Browns team that people say they are. This team, they have something different.”

Of course, things have changed dramatically since then. Stefanski is in charge now and the Browns have since solidified their offensive line and added players like Odell Beckham Jr. and another player on the wrong side of the 2018 contest, Austin Hooper.

Safety John Johnson III, the team’s prize signing, comes to Cleveland from a team with plenty of talent of its own in the Rams. Johnson played on a defense that finished fourth in defensive DVOA and featured the likes of defensive lineman Aaron Donald and cornerback Jalen Ramsey, two players considered to be the best at their respective positions.

Walker appreciates having them, too.

“One thing I will always say,” he said, “is you have a guy that can get to the quarterback and a guy that can shut down half of the field, that makes my job a lot easier.”

Still, it’s all those guys on the other side of the ball who really garner the attention.

“One of my close friends texted me and was like, ‘You are going to play for the (Golden State) Warriors on offense,’” Walker said.

If you follow the Browns’ quarterback on Instagram, you saw his welcome messages to players in his stories. It appears there was a more personal touch, too.

“When I signed, the first person to hit me up was Baker,” McKinley said, “and he did not have to do that. He did not at all, but for him to send me a text message, that right there means a lot.”

Johnson said he and Mayfield connected through a mutual friend in Los Angeles.

Walker had high praise for Mayfield when he looked back on preparing to play him last season, but he’s always liked what he’s seen from the Browns’ fourth-year signal caller.

“One of my (former) teammates texted me the other day and was like, ‘Oh, I see why you were defending Baker Mayfield in our locker room, because you wanted to go play for Cleveland.’” Walker joked. “But I told him before, Baker Mayfield impressed me in college — the way he played at Oklahoma.”

Talking culture change in football in the offseason is about as cliche as it gets, but it felt real last year after GM Andrew Berry and Stefanski came in and began building and it still feels real a year later.

“I felt like it was an opportunity of a lifetime, coming to a situation that things are moving in the right direction,” Johnson said.

“When you see a team trending in the right direction, you want to be a part of that,” Walker said. “Seeing them play last year, seeing the pieces they are adding this year, you know they are building something special.”

“A Super Bowl-contender team, and that is what I was looking for,” he said. “Especially with the climate of this free agency and a lot of one-year deals, I did not want to go anywhere that was trying to rebuild.”

Jackson also got a chance to know Browns defensive coordinator Joe Woods when they were together in Denver and Woods was the defensive backs coach. They won a Super Bowl together in 2015.

“He is one of the reasons why I made the decision to come to Cleveland because I have such a good relationship with him,” Jackson said.

Changing culture, of course, isn’t just winning on the field. While it certainly helps, it goes beyond what happens on Sundays.

“It is really a business that it is rare that people care about you, people actually appreciate you and people want to do things the right way,” Johnson said. “This city as a whole, let alone the organization, it drips that.”

“I am around guys who know how to work, and I am around a coach in (defensive line) Coach (Chris) Kiffin who is going to push me and teach me things,” Jackson said, “and, like I said, push me back to where I was.”

And players were watching last year when the Browns were one of the final eight teams standing.

“You talk about a team that is a fourth-and-one away from beating the Kansas City Chiefs and going on to the next round,” Walker said. “A team that you could say is a couple pieces away or maybe a play or two away from being in talks of playing in the Super Bowl last year. You join a team like that with the culture they are building, the team, the camaraderie, all of that stuff. Again, I am a small part of joining a great organization and an organization that is turning in the right direction. I am proud to be a part of it.”

What offseason grade do the Browns get? Hey, Mary Kay! podcast