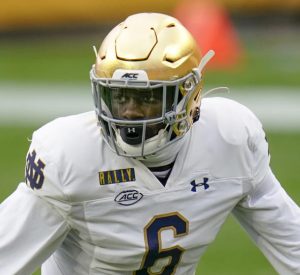 The most current mock draft from Pro Football Concentration provides again a name not projected to the Cleveland Browns in a number of months. PFF analyst Andrew Erickson thrusts the identify Jeremiah Owusu-Koramoah, the hybrid linebacker/security from Notre Dame, back again on the Browns at the No. 26 general decide on.

Owusu-Koramoah, or JOK in scouting shorthand, was a popular Browns projection before in the offseason but has frequently been coming off the board nicely just before Cleveland picks in additional the latest mocks. He definitely will make sense for the Browns defense with his protection potential and versatility, as Erickson notes,

Clevelands’ principal weakness on protection is at linebacker, which helps make drafting Jeremiah Owusu-Koramoah an simple alternative for them. JOK’s various skill set as a box basic safety, explosive linebacker and slot defensive back again allow him to make performs all above the discipline.

If he’s on the board, the Browns definitely need to have to think about JOK. His abilities are an fantastic suit for what the Cleveland protection requirements.

Browns complete mock draft v4.: The ‘trade out of the 1st’ circumstance