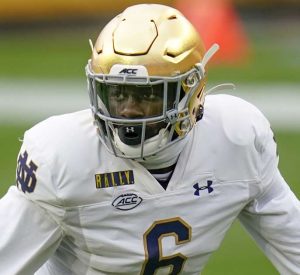 The latest mock draft from Pro Football Focus brings back a name not projected to the Cleveland Browns in a few weeks. PFF analyst Andrew Erickson thrusts the name Jeremiah Owusu-Koramoah, the hybrid linebacker/safety from Notre Dame, back upon the Browns at the No. 26 overall pick.

Owusu-Koramoah, or JOK in scouting shorthand, was a popular Browns projection earlier in the offseason but has generally been coming off the board well before Cleveland picks in more recent mocks. He certainly makes sense for the Browns defense with his coverage ability and versatility, as Erickson notes,

Clevelands’ main weakness on defense is at linebacker, which makes drafting Jeremiah Owusu-Koramoah an easy choice for them. JOK’s diverse skill set as a box safety, explosive linebacker and slot defensive back allow him to make plays all over the field.

If he’s on the board, the Browns definitely need to consider JOK. His skills are an excellent fit for what the Cleveland defense needs.

Pro wrestler Mike ‘The Miz’ Mizanin hypes up the Browns

Watch: Finishing the Browns job in the draft and free agency

No team has been worse at drafting WRs than the Browns

Joe Thomas gets divine praise on the Dan Patrick Show