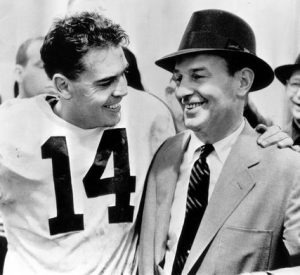 I was talking to an NFL executive about the Browns and he said something that made me think.

“How would you like to be (Patriots coach Bill Belichick) scrambling to find a quarterback,” he said. “It has to be a relief for the Browns not to be in that spot.”

New England doesn’t have a quarterback, unless you think Cam Newton, Brian Hoyer or Jarrett Stidham are the answer.

“Bill is a great coach,” said the executive. “But life without Tom Brady was tough for him … 7-9 record.”

Belichick did have an 11-5 record with Vinny Testaverde and won a playoff game in 1994. It was the last Cleveland playoff victory until 2020. He also had an 11-5 record in 2008 when Matt Cassel took over for the injured Brady.

But in general, it was Belchick and Brady … or Brady and Belichick, depending upon your view.

I mentioned that Paul Brown never won a title without Otto Graham.

“He never even won a playoff game without Otto Graham,” said the executive. “Great coach, but he needed the quarterback.”

We went back to the Browns.

“Baker is a little different, but he’s their guy,” said the executive. “They can win with him. Think of all he’s been through in his three seasons. He has the toughness you need.”

He meant Mayfield being through four coaches and three offenses in his first three seasons. That usually ruins most young quarterbacks.

Darnold was drafted in 2018 by GM Mike Maccagnan and coach Todd Bowles. A year later both were fired. Adam Gase was hired as coach and interim GM in 2019 as ownership looked for a full-time GM. The Jets settled on Joe Douglas for the job.

Gase lasted two seasons – with 7-9 and 2-14 records. He was fired, but Douglas survived. Then Douglas traded Darnold to Carolina last week.

Watching Mayfield deal with all the coaching changes and front-office intrigue is why the executive is very upbeat about the Browns QB.

“He finally has the same coaching staff and offense for two years in a row,” he said. “That has to be a relief for Baker.”

The other reason for confidence in Mayfield is his relationship with coach Kevin Stefanski. They worked through some rocky challenges early in the season. In his first six games, Mayfield had 10 TD passes compared to six interceptions.

In his last 12 games (counting playoffs), it was 20 TD passes compared to three interceptions. The offense changed and grew as Mayfield adapted to Stefanski’s offense. The executive kept talking about the benefits of stability. The Steelers have either been good or great since 2003, the year Ben Roethlisberger was drafted.

“But this could be his last season,” said the executive. “They could be like New England on the search for the next guy. It can be humbling.”

THE FUTURE AND BAKER

The executive mentioned how Baltimore seems set with Lamar Jackson, also drafted in 2018. Cincinnati should be on the rise with 2020 top pick Joe Burrow. That assumes both stay healthy.

Which brings us back to Mayfield. He is durable. Since talking over as the starter in Game 3 of his rookie season, he’s never missed a game. He’s missed very few snaps.

Burrow is coming off major ACL knee surgery. Jackson has missed only two games since he took over as Baltimore’s starter in the middle of the 2018 season. He seemingly has defied the odds by staying healthy despite his fearless running style.

With Burrow, Jackson and Mayfield, the AFC North has three of the NFL’s top young QBs. The division also has three Heisman Trophy winners.

It’s too early to know if Mayfield will be great. But he showed in the second half of last season how he can be very good. He can beat Pittsburgh in back-to-back must-win games. He can adapt to a new offense and a new way of seeing the game, where it’s not all about him and his stats.

Best of all, the Browns and their fans don’t have to be in a state of QB panic. That alone is reason to exhale as the Browns approach the draft.

SEARCH FOR A PASS RUSHER

1. I’ve been staring at the list of available veteran free-agent pass rushers. I can see why most of these guys are available. There are age issues. Injury concerns. Perhaps a few have inflated opinions of their worth.

2. The Browns have been courting Jadeveon Clowney for parts of the last two offseasons. I’m not a big fan of the defensive end, who missed eight games in 2020 and had knee surgery. He has a history of knee issues. He also didn’t have a sack.

3. Profootballfocus (PFF) gives some clues to why the Browns probably like Clowney: “He has elite tools, but he’s never been an elite pass-rusher. … The sack totals will fluctuate from year to year, so don’t let that change the narrative: Clowney is a good, not great, pass-rusher. He does his best work in the run game, using those elite tools and heavy hands to win at the point of attack. Since entering the league, Clowney is a 95th percentile run defender and a 77th percentile pass-rusher.”

4. PFF ranks Clowney higher than other available free-agent edge defenders such as Ryan Kerrigan, Aldon Smith, Justin Houston and Melvin Ingram III. I’m not quite sure why that’s the case, but the Browns and PFF seem to have the same opinion.

5. I’ve long liked Kerrigan, but he will be 33 by opening day. At Washington, he played in all 16 games in 2020, but only 38% of the snaps. He had 5.5 sacks. I do think he could help the Browns as a role player. Ingram had been a very productive player, but he’ll soon be 32. He had knee issues and played only seven games with zero sacks last season.

6. The best on the market appears to be Houston, but that’s my opinion. He played all 16 games in the last two seasons for the Colts, racking up 19 sacks. He’s 32 and still seems like a pretty good player. But the free-agent market has not been strong for him. He’d be my first choice for the Browns.

7. PFF on Houston: “What does he have left at this point after 10 years in the league? He doesn’t have the same burst and power that made him the fifth-best pass-rushing edge defender in the NFL during the last decade. He finished 2020 with the lowest pass-rush grade of his career. Houston still flashes his ability, as he can get offensive tackles off-balance with his length and good technique, but the days of accumulating 50-plus pressures in a season appear to be in the past. … He may have something to offer in a rotational role.”

Talking to myself about some former Tribe players

Hey Terry, is this a make-or-break year for Joe Woods? What about OBJ?

Francisco Lindor’s contract: The game within the game

Terry’s Talkin’ Browns: Why no love for Rashard Higgins?

How many games will the Tribe win this season?

When it comes to Cleveland Indians worries, what are we missing?

New Browns face masks for sale: Here’s where you can buy Cleveland Browns-themed face coverings for coronavirus protection for adults and youth, including a single mask ($14.99) and a 3-pack ($24.99). All NFL proceeds donated to CDC Foundation.