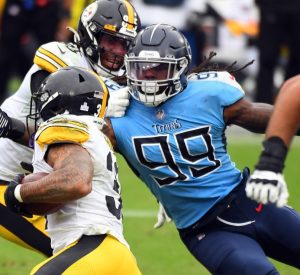 Much of the talk revolving around free agent defensive end Jadeveon Clowney has focused on what Clowney wants, why he’s not signing now. Given what happened last year, where Clowney did not sign until training camp, that’s a perfectly reasonable position to take, but there are some other elements that could be holding up a signing this year.

The biggest potential stumbling block is the health of his knee. Clowney had meniscus surgery that ended his 2020 season with the Tennessee Titans. Some of the reports suggested he wouldn’t be cleared until the middle of April. The Browns cannot sign Clowney until his knee can pass a physical.

That’s not a knock on Clowney, but simply the reality of having had knee surgery. The fact that Clowney has not visited any other teams might be indicative that his knee isn’t quite fully recovered. Whenever that happens, he might take a more active approach to free agency and trying to get a deal done. That could have been part of his free agency visit with the Browns.

The Browns are pretty consistent about setting a price and sticking to it. Maybe Clowney isn’t thrilled at the number. It’s also possible the Browns have other irons in the fire they are considering. As Charles Robinson of Yahoo! Sports alluded to on Baskin and Phelps om 92.3 The Fan, he expects the Browns to make another move before the NFL Draft, but his unwillingness to simply sign a player like Clowney or Melvin Ingram might suggest the Browns might be looking into a trade.

Perhaps a player like Danielle Hunter of the Minnesota Vikings or maybe another edge rusher, the Browns might want to fully determine if those are viable options before they want to sign Clowney. With all due respect to Clowney, Hunter is one of the best pass rushers in the NFL and would change the Browns defense in a way that Clowney can’t.

The flip side of is the potential for the Browns to make a move, like a trade, can also be used as a bargaining chip with Clowney in a contract negotiation. The Browns aren’t the only option for Clowney, but they might be the best one, particularly if winning is important to him.

Waiting for the NFL Draft has more upside to Clowney than it does the Browns. Even if the Browns pick an edge rusher in the first round, Clowney is still an attractive option. If they don’t get a pass rusher early, Clowney may have slightly more leverage.

More likely, other teams that could be interested in Clowney might not be able to get what they need in the NFL Draft and that makes Clowney more necessary for their team, which might help him leverage more cash.

The Browns like Clowney, clearly. They were willing to offer him a lucrative deal last year and wait until almost the bitter end for him to make a deal. He can dominate at the point of attack, which is important for what this defense wants to do, adding more speed on the field at the second and third level.

Collapsing the pocket is also the way the Browns want to be able to put pressure on a field of quarterbacks that can make plays with their legs. Clowney has the capacity to do that, so while his statistics aren’t great, having never had a double digit sack season, the fit makes sense.

Clowney showed he was willing to wait to training camp to sign a deal last year, but it cost him. When he didn’t get the money he was hoping for, he decided to sign a one-year deal to enable him to have a great season and get more money in free agency this year. That didn’t happen and he got hurt.

The pandemic was also a legitimate factor in the decision making process last season. It’s certainly still an ongoing issue, but it’s less threatening than it was last year.

Clowney may be in the same situation, this time not by choice, forced to take a one-year deal and hope to earn a lucrative deal. This time, there may be more moving parts, which could explain why a deal hasn’t been struck between the Browns and Clowney.