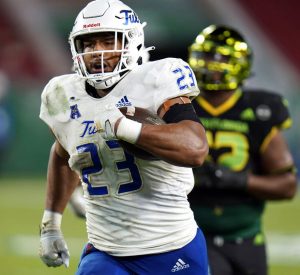 CLEVELAND, Ohio – If you’re looking for a consensus on how the Browns will use the 26th overall pick in the 2021 NFL Draft, well, you’re going to be disappointed by mock drafts.

And we’re not just talking about names. The position is even tough to nail down at this point.

Most mock drafts have the Browns targeting either an edge rusher or linebacker at No. 26. ESPN’s Mel Kiper has the Browns taking Tulsa linebacker Zaven Collins in his most recent mock draft. His colleague, Todd McShay, goes the other direction, sending Miami edge Gregory Rousseau to Cleveland.

Both Collins and Rousseau show up in mock drafts published by national websites over the past week. Here’s a roundup, including what analysts had to say about their Browns choices:

Ryan Wilson, CBS Sports: While NFL teams certainly knew about his talents, for the media, Davis was one of the best-kept secrets of this draft class until late in the process. But he’s a special talent who’s made just 11 career starts. Put another way: his best football is in front of him.

Daniel Jeremiah, NFL.com: I’ve been president of the Davis fan club for a while now, but to say he destroyed at his pro day would be an understatement. It matches what I saw on tape, and he fills a need for Cleveland.

Sam Monson, Pro Football Focus: Cleveland has done an impressive job of overhauling its roster, and the team heads into the draft without many holes in need of immediate attention. Jeremiah Owusu-Koramoah has elite quickness and speed for a linebacker, and he also earned one of the best PFF coverage grades in the nation in the slot, regardless of position. JOK could bring some elite versatility to the Browns’ coverage unit.

Walter Cherepinsky, WalterFootball.com: The linebacking corps was a weak spot for the Browns last year, so this is a position the front office could target early in the 2021 NFL Draft. Jeremiah Owusu-Koramoah is a fast linebacker who has drawn comparisons to Telvin Smith.

Danny Kelly, The Ringer: The Browns hit their need for defensive line depth by signing pass rusher Takkarist McKinley and defensive tackle Malik Jackson in free agency. Now the team needs to shift its focus to the linebacking corps, and that’s where Collins comes in. The Tulsa star has good size, athleticism, and instincts, and could wear a number of different hats for Cleveland―both as an off-ball linebacker and a sub-package blitzer.

Peter Schrager, NFL.com: Rousseau didn’t have the lights-out pro day everyone wanted to see, but he still has the lights-out potential. He’s put on a ton of weight since he got to Miami and is just scratching the surface. A 2020 opt-out who is a hard evaluation with just one full year of college football, Rousseau’s upside remains enticing, especially in the back end of Round 1.

Brad Gagnon, Bleacher Report: The super-physical Miami product has a top-end motor and the numbers to back it up. He had so much injury baggage during his original college tenure at UCLA that he briefly retired from football over concussion issues, but the ceiling is extremely high for a player who registered 15.5 tackles for loss and eight sacks last year at Miami. That’s enough to gain an edge over linebacker Zaven Collins, who is worthy of being selected in this range but doesn’t possess the same difference-making potential as a player like Phillips does on the edge.

Riding out a tornado, some frustrating phone calls and the NFL draft – Terry Pluto

Browns picking 26th in the NFL Draft: The unfortunate, the infamous and the forgotten

What Browns free agent additions told us about culture, winning and Baker Mayfield