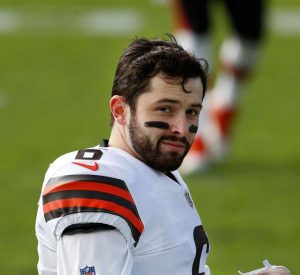 Baker Mayfield turns 26 on April 14th. And while wishing the Browns quarterback a happy birthday, it’s a good time to reflect on why the Browns need to celebrate their franchise quarterback.

Mayfield has played three seasons in the NFL. Since taking over for Tyrod Taylor early in his rookie campaign in 2018, Mayfield has produced a winning record as the Browns starting QB. Cleveland has 23 wins and 22 losses in games Mayfield has started. Included in those 23 wins are seven game-winning drives engineered by Mayfield himself.

Mayfield also has a 1-1 record in the postseason, and earning the victory over Pittsburgh in the wild-card round is hopefully just the beginning of more wins in the playoffs as Mayfield settles into the middle age for quarterbacks.

Happy birthday Baker, may you celebrate many more while wearing the brown and orange