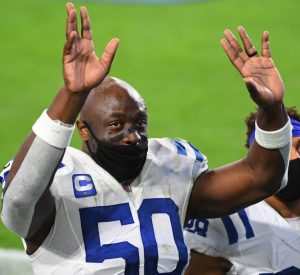 The Pittsburgh Steelers could face a more challenging AFC North in 2021 as both the Cleveland Browns and Baltimore Ravens are hunting for big-name defensive lineman in free agency.

On Tuesday, the Ravens hosted defensive end Justin Houston for a visit at their facilities. The four-time Pro Bowler is reportedly still in talks with his 2020 team, the Indianapolis Colts, but the Ravens are making a push.

Houston, 32, brings 97.5 sacks into the 2021 season, including eight last year. The Ravens are looking to replace pass rushers Matthew Judon and Yannick Ngakoue, who they lost in free agency.

The Browns are still working on bringing in defensive end Jadeveon Clowney for a visit. Clowney was set to visit Cleveland on Monday but was unable to travel Sunday night.

According to ESPN, the Browns are hoping to reschedule the visit for mid-week and are hoping to get a deal done with the former Tennessee Titan.

Meanwhile, the Steelers are still working on fixing their offensive line. So far, they’ve replaced Maurkice Pouncey with B.J. Finney and J.C. Hassenauer but have not committed to a left tackle. Zach Banner, Chuks Okorafor and Joe Haeg are on the roster but have little combined NFL left tackle experience.