Home » Cleveland Browns » NFL Draft 2021 preview: What you need to know about the Browns, Buckeyes – and Cleveland – with two weeks to go 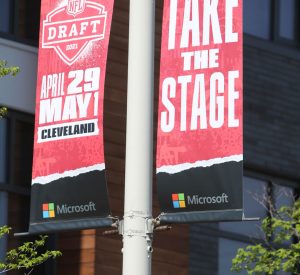 CLEVELAND, Ohio — Jadevon Clowney is signed and sealed for the Browns’ pass rush opposite Myles Garrett.

What does that mean for the draft?

It shouldn’t factor into what they do with the No. 26 overall pick, both Mary Kay Cabot and Dan Labbe agreed earlier this week in the Orange and Brown Talk podcast.

The draft is two weeks away and begins at 8 p.m. Thursday, April 29 in Cleveland with the first round (ESPN and NFL Network will carry television broadcasts). The second and third rounds follow on April 30 and the fourth through seventh rounds are May 1.

The main stage is set with Lake Erie as the backdrop. The Browns have nine picks in this year’s draft, including two each in rounds three and four. Here is everything you need to know, based on what cleveland.com has written and covered so far:

Pre-draft analysis on the Browns

⦁ Tulsa linebacker Zaven Collins is a favorite among Football Insider subscribers, and he is one of three players Dan Labbe believes the Browns should consider, if available, at No. 26 in the draft. Two more to keep an eye on: Northwestern cornerback Gregory Newsome II and Minnesota wide receiver Rashod Bateman.

⦁ Readers ranked the Browns’ positions of need for the draft. Before the Jadeveon Clowney signing, they had edge rusher atop the list. Cornerback and defensive tackle followed with linebacker fourth, writes Scott Patsko, who broke down each position.

⦁ How does Georgia edge rusher Azeez Ojulari sound? He was Tim Bielik’s pick in a seven-round mock draft that saw the Browns add a receiver in the second round, plus a cornerback and linebacker in the third round.

⦁ Ellis Williams took a look each positions of emphasis and broke each one down with the hypothetical of the Browns taking a player at that position in the early rounds. If they take a wide receiver, one comes to mind: Minnesota’s Rashod Bateman. Landing him will cost a first-round pick, wrote Williams, who added additional players to watch for the following rounds.

⦁ If the Browns select a linebacker early in the draft Zaven Collins, writes Williams, who broke down his positives and negatives.

⦁ If the Browns select an edge rusher, Georgia’s Azeez Ojulari topped the list of potential players to consider for Williams. As for Clowney, Williams wrote the Browns can let the board fall to them regardless of the signing.

What history is saying

⦁ Baker Mayfield is the only quarterback in the NFL drafted in the top five from 2009 to 2018 and still with his original team. It’s been a particularly bad year for quarterbacks drafted in the top five in that span, writes Mary Kay Cabot, with four of them getting the boot this offseason from the team that drafted them: Jared Goff, Carson Wentz, Mitch Trubisky and Sam Darnold, all selected from 2016-2018.

⦁ Looking back on previous quarterbacks drafted in the top five, what can the Browns learn from them with Mayfield. That was the subject of an Orange and Brown Talk podcast with Mary Kay Cabot, Dan Labbe and Scott Patsko.

⦁ Terry Pluto is looking back on what happened to former Browns players on their draft day. He starts with 2000 and fourth-round pick Aaron Shea.

⦁ If the Browns don’t trade out of the 26th pick, they will make their lowest initial selection of the first round since 1995. They took Ohio State linebacker Craig Powell with the 30th pick that year. There is history with Cleveland and the 26th pick. The Browns have held it seven times, and Scott Patsko breaks down the unfortunate, infamous and forgotten.

What to know for Ohio State

⦁ Justin Fields will break Ohio State’s NFL quarterback curse, writes Nathan Baird, and one statistic all but guarantees it.

⦁ Can Jonathan Cooper raise his NFL ceiling by switching from defensive end to linebacker? He came to Ohio State as a four-star defensive end in 2016, writes Stephen Means.

⦁ Will Trey Sermon pick up where he left off for Ohio State? The running back closed the 2020 season with a dominant stretch before an abrupt injury, writes Nathan Baird.

⦁ Paris Johnson Jr. is sacrificing his NFL trajectory in a “seamless” transition to guard, writes Nathan Baird. Johnson has put together an impressive spring, moving from tackle to guard, but what does it mean for his long-term NFL potential?

⦁ Presumptive No. 1 overall pick Trevor Lawrence will watch from Clemson instead of attending in Cleveland, writes Mary Kay Cabot.

What’s going on around town?

⦁ The NFL created a OnePass app for fans to reserve tickets and attend the draft for free. Capacity will be limited, writes Tim Bielik, while the Draft Experience will feature a 40-yard dash and vertical jump against NFL players on LED screens. FirstEnergy Stadium also will be open for fans to kick a field goal.

⦁ How does Destination Cleveland plan to promote the draft and city? Susan Glaser provides a breakdown.

The first round of the draft begins 8 p.m. April 29. The second and third rounds start at 7 p.m. April 30, and the final four rounds will begin at noon May 1.

⦁ Kings of Leon, a Nashville-based rock group, will perform on April 29 at the Draft Theater stage. The NFL will stream the full concert on NFL.com, in the NFL app and on the league’s Facebook page.

⦁ How and where to buy hats the players will wear, shirts and more from the 2021 NFL Draft.