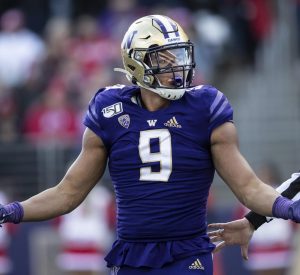 The Cleveland Browns and the NFL draft don’t have the greatest history, but the team’s recent moves are quickly rectifying that.

While the Browns made some flashy signings in the last two offseasons, the current playoff team has found plenty of foundational players through the draft. Baker Mayfield, Myles Garrett, Denzel Ward and Nick Chubb are all “homegrown” talents.

There have been some underwhelming picks too, though. Early returns on Greedy Williams and Grant Delpit have been disappointing thanks to injuries. Austin Corbett—the 33rd overall selection in 2018—was traded to the Rams for a fifth-rounder.

Now that the Browns have established themselves as playoff contenders, the spotlight on these picks will shine brighter. Finding legitimate contributors in the draft could be the difference between a Super Bowl run and sitting at home watching after Wild Card Weekend.

That makes targeting players who might not fit the scheme, pose injury risk or don’t present value where the Browns are slotted to pick bigger risks than they need to be. Each of these prospects should be avoided for Cleveland to maximize its picks during the draft.

Andre Cisco looks great on paper. He was spotlighted by The Athletic’s Bruce Feldman for his speed and strength combination. Feldman reported Cisco ran a 4.33 laser-timed 40 as well as a blazing 4.1-second shuttle while bench pressing 225 pounds 17 times.

The Browns’ addition of John Johnson III and the hopeful return of Grant Delpit from injury diminishes the need for a safety, but with defensive coordinator Joe Woods’ use of nickel and dime packages, it wouldn’t be surprising to see them add another safety to the roster.

That safety shouldn’t be Cisco despite his physical gifts. He only played two games in 2020 after tearing his ACL in pregame drills at Syracuse. He missed another three games in 2019.

In his evaluation, Lance Zierlein of NFL.com noted, “he plays with fearlessness, but his linear, full-speed pursuit diminishes his margin for error greatly and could make him a high-risk safety.”

His injury history and penchant for playing out of control should be enough for the Browns to shy away from using a Day 1 or 2 pick on him.

The Browns addressed the short-term need for a defensive tackle with a one-year deal for 31-year-old Malik Jackson, but it’s likely the team turns to the draft to build some depth on the interior at some point.

Jordan Elliott is in line to play a bigger role, Andrew Billings is set to come back from injury and Jackson is sure to help. But Sheldon Richardson is in the final year of his contract and is north of 30 years old now.

General manager Andrew Berry would be wise to add another young defensive tackle to the roster, but how much he is willing to pay for one in draft capital will be important. Defensive tackles with limited pass-rush upside are fairly easy to find.

If you’re going to spend a first or even second-round pick on an interior defender, they better have the potential to at least become Jarran Reed, if not Aaron Donald.

For Washington prospect Levi Onwuzurike to even become Reed, he’s going to have to make significant strides quickly in the NFL. The 6’3″ 290-pounder has the build of a pass-rushing defensive tackle but doesn’t have the production to match.

He amassed only seven career sacks in three years with the Huskies before opting out of the 2020 season. Depending on Onwuzurike to become a consistent threat to get to the passer after not playing for more than a year is a gamble that should keep the Browns away from the defensive tackle.

Not to pick on the Washington defensive line here, but Joe Tryon is another prospect who makes sense for Cleveland on paper but not in actuality.

Tryon would have benefitted from showing development in 2020 but opted out. At 6’5″ and 259 pounds, Tryon looks the part of an edge-rusher. But there’s a lot of refinement that is going to need to happen for him to be effective.

Tryon racked up eight sacks in his 2019 campaign but was also one of the few edge prospects who averaged fewer than one tackle for loss per game.

Zierlein also noted the lack of polish in Tryon’s game, saying he has “the traits and athletic profile to move up the draft board, but tape shows he might still need more course work before he’s ready to make a difference in the pros.”

The Browns are already taking a risk on Takk McKinley as part of their defensive end rotation. The priority should be finding immediate difference-makers in the first two rounds at this point. Tryon doesn’t fit that profile.