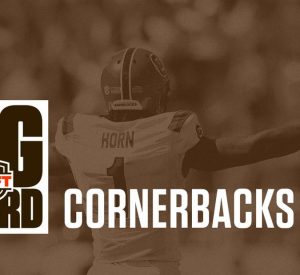 CLEVELAND, Ohio — Here we are once again as today we look to break down the best coverage option for the Browns upcoming draft.

The OBR is at the forefront of coverage for Browns fans and we will continue to do so well after the 2021 draft has come and gone. With such a critical time coming, and many mainstream voices missing the mark on the Browns needs and desires for their key picks, myself and Stephen Thomas will be putting out our personal big boards in an attempt to clarify to our best knowledge who the Browns will value at key positions and which players make the most sense for their guardrails at each spot.

We know the front office has analytical angles they take on certain positions and they have guardrails built-in as well.

Now, a key reminder here is that we are basing large parts of our evidence on the analytics-based drafts Andrew Berry was involved in during previous Browns regimes, and, more heavily, off his first draft as Browns general manager. So, we will avoid those age 23 and older until we have evidence the group will bend for that higher age, and we will make sure to focus on ranges of players that are realistic for positions (ie. we won’t be looking at top quarterbacks).

The Browns solved more of their pass rush needs yesterday signing Jadeveon Clowney, and that means the need at cornerback is still glaring. Greedy Williams is set to return but nerve damage to the shoulder has to be tested in live-action before assurance the issues are gone. While adding Troy Hill helped, they are still just an injury away from M.J. Stewart and Robert Jackson being on the field again in meaningful moments. While Denzel Ward and Williams are quality talents, they both have an injury history that can’t be ignored. The Browns have to expand their cornerback room with multiple picks in this draft. Let’s check the board for the top prospects at the position.