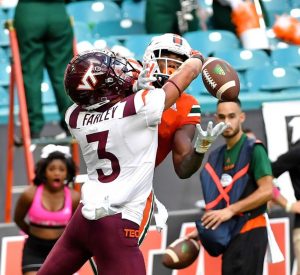 With the 2021 NFL Draft approaching, the Cleveland Browns will have their own tastes and board based on what they are trying to do in every phase of the game. Based on what is known about what they want to do, some prospects stand out as fits including Caleb Farley, corner from Virginia Tech.

Farley did not test athletically as he was going to undergo a microdiscectomy; an outpatient procedure to remove the damaged portion of a herniated disc in the spine. Recovery time is estimated to take between six to eight weeks. He missed a pair of games at the end of the season in 2019 due to back spasms.

Anything involving back surgery is generally viewed as a big deal, because it so often does not just stop at one. It potentially could alter Farley’s career.

Farley also suffered a torn ACL his true freshman season that resulted in a redshirt.

Between the knee and his back, teams will have their doctors evaluate Farley and make a decision. That’s the reason, the only reason the Browns might be able to get Farley.

Farley is by no means old, but he is older relative to the field of the top corners available in this year’s draft.

Farley hit the marks for production as a freshman, but his sophomore season was spectacular in terms of coverage results. His discipline and awareness as a coverage corner are special.

For such a big corner, he doesn’t rely on his hands to stay with receivers in coverage. He will certainly use them to steer and try to control the opponent, but particularly down the field, he plays in a manner that fits the NFL rules.

His patience is remarkable. Farley will wait even as receivers are making moves in front of him to get him to try to open his hips and he won’t until it’s truly necessary. It enables him to run with the receiver, get in his hip and taking the receiver out of the play.

Along with this, Farley shows excellent eye discipline, focusing on the receiver and the route when he’s in man coverage, not often peeking into the backfield. It’s difficult for opposing receivers to get away from him.

Farley does a great job of establishing position with the receiver before looking to make plays on the ball. So when he’s separated from the receiver, he is playing their eyes and hands to knock down the pass. When he’s properly positioned, he’s looking to intercept the pass.

His agility and explosion allow him to take away daylight from receivers that otherwise look to be open. For example, he intercepted a pair of passes against the Miami Hurricanes on out routes where the ball comes out anticipating the move.

Farley is experienced in a number of different coverages. Tight man coverage without press, off man and some zone looks. It’s notable just how comfortable and how easy it often looks for Farley in coverage. Occasionally, he will get too high in coverage, which is really the only notable area to criticize.

His sophomore season did not have many tackles, but he’s more than willing to come up and make tackles effectively.

Where the Browns Might Select Him: Unless the Browns flag him medically, if he’s available at the 26th pick, they have to take him there. It’s possible they could trade up too.