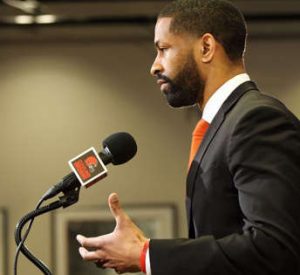 CLEVELAND, Ohio — Believe it or not, Andrew Berry is still pretty new at this GM thing. He’s done a lot of work, first solidifying the offense last offseason and then beefing up the defense this spring.


Every move is an opportunity to learn something new about the team’s top personnel man. Here’s what we learned about him after signing Jadeveon Clowney.

Berry attempted to acquire defensive end Takk McKinley four times last year — once via trade and three other times via waivers. After missing on all four, as McKinley put it, the fifth time was the charm.

Now, a year after aggressively pursuing Clowney, the Browns landed him, too.

“I got that same feeling [of relentlessness] he has for me for him,” Clowney said on Wednesday. “That is why I said, ‘This dude is very relentless.’”

Berry is strong in his convictions when he believes a player can help his team, as these two particular signings show.

He’s smart with his money

This isn’t a surprise considering Paul DePodesta plays a huge role in the operation, but this isn’t Moneyball. Instead, it’s a smart allocation of resources.

The Browns already have their high-priced edge rusher in Myles Garrett, who earned a 5-year, $125 million extension last summer. While some of us — OK, me — advocated for paying another top edge rusher, it became apparent early on the likes of Trey Hendrickson and Carl Lawson were simply too expensive. Sure, the Browns have cap space, but even they are feeling the pinch of a pandemic-squeezed cap and have to be smart with how much they tie up in various positions.

Hendrickson signed a 4-year, $15 million deal with the Bengals while Lawson inked for three years and $45 million with the Jets. It’s not just the cost of those contracts, but the commitment beyond 2020.

The Browns added two edge rushers for about the same price and on one-year deals, providing them with flexibility. They also still have the chance to add an edge rusher early in the draft. (Yes, I still have Payton Turner from Houston circled in the second round.) It’s an efficient — not cheap — way to spend some money.

He recognizes the window

The roster is still talented and relatively cheap. Their quarterback is on his cost-controlled rookie deal, as is their top cornerback, while Garrett’s extension hasn’t really hit yet. According to overthecap.com, Garrett carries a cap hit of just over $9.3 million this year and a shade under $13 million next year before the number balloons to around $30 million.

This is the window of contention for a young team. There are phases to roster-building, and this is one of them — cost-controlled talent on rookie deals freeing up bigger dollars to spend elsewhere.

Eventually, Mayfield will make starting quarterback money and Ward will make big dollars and other players at premium positions, like Jedrick Wills, will come up for new contracts. Then the roster math changes and the talent becomes top heavy and you have to really supplement with draft picks.

Berry has built a contender while giving himself the flexibility to add long-term, affordable options in the draft.

5 reasons the Clowney signing is a smart move: Cabot