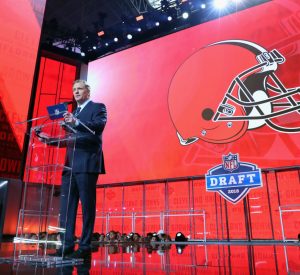 In the 2020 season, the Cleveland Browns finally ended the dreaded playoff drought and capped it off with a commanding win against the Pittsburgh Steelers. With the inaugural seasons for head coach, Kevin Stefanski, and general manager, Andrew Berry, in the books, they appear to be the right men for the job to take this franchise to the top. The 2021 NFL draft should be an important stepping stool to help them achieve that goal. This team does not have a lot of holes which gives them a good opportunity to go best player available with most of their picks. Here is a scenario in which they could attack the draft.

The Browns should look to add a player opposite of Myles Garrett and Kwity Paye would be an absolute home run here. He is an impressive athlete who is just scratching the surface in his abilities as a complete defensive end. Paye has great tools to build off of and should forge one of the best defensive end tandems in the coming years.

Cleveland gets more help up front here with this pick. In 2020, the Browns ranked 22nd in pass defense and were tied for 15th in sacks. Adding Nixon to the draft haul will help further develop the interior pressure after adding Kwity Paye to the edge in the first round. Nixon made a name of himself at Iowa this past season after going the JUCO route and began to show what he is made of as a player.

Continuing the Big Ten trend, Benjamin St. Juste will be the pick here for Cleveland. With solidified starters in Denzel Ward and new signing Troy Hill, the Browns need to bring in some competition for the other starting cornerback spot. St. Juste relies on length and excels in press-man coverage which will give him a good opportunity to win a starting job in the future.

Although safety is not a big need for Cleveland, with several guys walking out of the building they can continue to add to the position. Last year’s starting free safety, Andrew Sendejo, has not been brought back and 2020 second-round pick Grant Delpit is coming off a torn ACL that caused him to miss last season. Cisco is coming off a torn ACL himself, but he will add some much-needed versatility and competition to the back-end of the defense.

The Browns add another playmaker on the outside with this pick. Fitzpatrick had consistent production over the entirety of his college career because of how he wins. He is an extremely good route runner that wins with good technique more so than athleticism. He can become a reliable 4th option in the offense for Baker Mayfield.

After getting decent production from their linebacking core and signing Anthony Walker in free agency, the linebacker has become less of a need. Walker only signed a one-year deal in free agency so Dylan Moses could provide depth his first season while learning behind Walker. Moses is a worthwhile pick here in the fourth to see if they can tap into his potential that he seemed to have lost in his last season at Alabama.

When a team can truly pick the best players available, why not add more firepower to arguably the best running back room in the league? Herbert is a smooth athlete that plays with great speed and vision. He will certainly add value to the team right away and could even become the team’s primary backup depending on their future intentions for Kareem Hunt.

Alaric Jackson will add much-needed depth for Cleveland’s offensive line. He has experience playing offensive tackle but may be best suited to play at guard in the NFL. Either way, he can be a spot starter to fill in for injury at either position. He is a perfect fit for how the Browns like to establish the run game.

Back-to-back picks to end the draft with Cleveland adding more depth to the offensive line. Young is better suited as a pure offensive tackle and has experience in a run-heavy offense at Kentucky. With their primary backup from last season, Kendall Lamm, heading to the Titans, the Browns needed to add this depth in the case of injury.