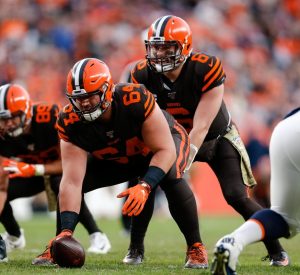 The players for the Cleveland Browns collectively decided to opt out of voluntary workouts in the offseason, joining a number of other teams that have informed their team as a unified front they won’t be participating. There are some downsides and risk on the part of the players, but last offseason suggests it’s not necessarily a major problem for the team.

It’s hardly a surprise the Browns opted out of offseason workouts as center J.C. Tretter, the President of the NFLAPA, has been a major proponent of the move for a few reasons. First, the NFLPA and owners haven’t come to an agreement on guidelines for the offseason activities for the pandemic. Second and more importantly for Tretter, they believe that the offseason workouts, which had become increasingly anything but voluntary pre-pandemic, don’t provide the benefits that outweigh the risks for players.

Last year’s offseason was a real challenge for the Browns, not only dealing with the pandemic, but doing it while having a new front office and head coach, trying to install new systems in an abridged offseason. Combined with no preseason games, the Browns came out and got shellacked in week one by the Baltimore Ravens, arguably one of the teams that could most afford losing practices.

The Browns rebounded and won their next four games. Tretter would point to this as evidence of his point that it wasn’t a problem.

With continuity, a new word for the Browns, they should be able to deal without practices in the Spring. Training camp likely won’t be as impacted as it was last season and the plan is for three preseason games, for better or worse.

The Browns worked with players that had workout bonuses in their contracts and allowed them to essentially send video of their workouts. Something Andrew Berry’s contracts seem to be recognizing as a thing of the past, they may do the same thing this offseason.

So much of the workout bonuses is about control for teams. The teams, particularly coaches feel much better about players training when they can see them and potentially control the situation. This regime for the Browns seems willing to let players who want to pay their own way of training to do so, basically looking at it as an opportunity to make players happier.

Players want to be able to train where they want. Many do it in Florida or Arizona. Some take their families on vacations and train part of the day, spending the rest of it with them. That extra freedom is a small sacrifice to make for the Browns to make the players happier, improve their overall quality of life.

In turn, the players take on more responsibility as well as liability. Players who don’t train in Berea under team supervision aren’t covered for injuries they might sustain in training, if they are doing so with a personal trainer or coach in the offseason. That’s beyond the expense of paying those people out of pocket.

Kevin Stefanski at his first press conference for the new season made a few comments on players who were training in the building, mostly younger players. Understandably, young players on rookie contracts are inclined to take advantage of the facility, because they don’t have to pay for it as well as things like access to trainers or food.

Opting out doesn’t prevent these players from working out in the building either. All it does is give the players the freedom to choose their own path, eliminating an arbitrary set of weekends that they have to travel back to Cleveland.

The team can’t practice the way it would in OTAs, running plays or scrimmaging, but they can meet virtually. And there is obviously some inherent risk with competing like that, but it’s no different than what some players do on their own to try to improve for the season.

At some point, Baker Mayfield will undoubtedly have skill players come down to Austin, Texas again and have them stay at his house a few weeks to train together, work on routes.

That’s the other reason that some coaches are increasingly willing to trust their players to handle the offseason on their own. They want to win as badly as the coaches do, but they know their bodies better than anyone and often want to train a specific way. Trusting the players in this manner is empowering them, which can encourage them to buy in more. There’s more ownership of the overall product, which is valuable.

In some ways, there’s more pressure on the players to perform having opted out of these workouts, because there is some element of having to prove their point.

Overall, the movement and acceptance is further evidence of the evolution of the coach and player relationship in professional sports. Rather than the dictatorships of the past coming out of World War II and the Korean war in terms of the coach-player dynamic, there is more of a partnership in terms of how they view each other. Coaches are trusting the players to be ready and in turn the players understand that these coaches have their best interest at heart and are more willing to trust what they are teaching.

Stefanski is a good example of this changing dynamic as he often talks about working with the players. Coaches are still coaches and players are still players, but there’s less blind trust, so these efforts by the teams and coaches are in an effort to build that bridge and lead to a better overall product.

READ MORE: Void Years Only a Problem If Browns Don’t Plan For Them