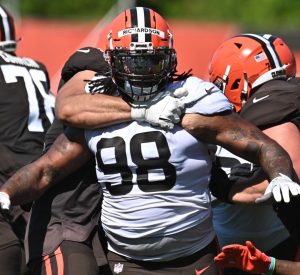 Friday, the Cleveland Browns have announced the release of defensive tackle Sheldon Richardson. The move will free up $11 million in cap space and the Browns will incur $1.66 million in dead cap, the remaining guaranteed money on Richardson’s contract.

Richardson has been with the Browns for two seasons after then GM John Dorsey signed him to a three-year deal. An effective defensive tackle, Richardson was an iron man that played a ton of snaps over those two seasons, including the 2019 season when both Olivier Vernon and Myles Garrett were out for the season and he was surrounded by street free agents.

The move means that both the starting defensive tackles from last year, Larry Ogunjobi and now Richardson, could be playing elsewhere next season. Ogunjobi already signed with the Cincinnati Bengals.

It’s not impossible the Browns could look to bring back Richardson later on a smaller contract, but for the moment, he is free to shop his talents elsewhere for a deal.

The Browns have done a good amount of spending this offseason, but hadn’t cut many players. Adrian Clayborn was released early on in free agency, but they have not done anything else since then.

The Browns have added Malik Jackson at a far smaller contract, but he may not be suited to play a full load of reps. For now, the Browns have a pretty sizable hole at defensive tackle to fill.

The top defensive tackle in the NFL Draft is widely regarded as Christian Barmore out of Alabama. It’s a risky proposition to make this move with the hopes of landing Barmore, picking 26th overall. They likely have something else in mind.

The timing, both for the Browns and Richardson, may have them re-visit a reunion later in the process.

The Browns now have approximately $22 million in cap space, which frees them up to make more moves.

READ MORE: Browns Players Opt Out of Voluntary Workouts – Does it Matter?