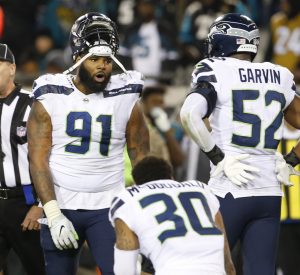 After overhauling their defensive line with offseason additions Kerry Hyder Jr., Carlos Dunlap, Benson Mayowa, Aldon Smith, and Al Woods, the Seahawks appear set in the trenches and out on the edge. But a familiar face has suddenly found his way to the free agency market, potentially offering them an opportunity to fill the hole left by the recently departed Jarran Reed.

Defensive tackle Sheldon Richardson, who the Seahawks acquired for a 2018 second-round selection and receiver Jermaine Kearse in 2017, was released by the Browns Friday afternoon. The move freed up $11 million in salary cap space for Cleveland, and ironically paved the way for them to add another player formerly acquired by Seattle via trade: defensive end Jadeveon Clowney.

Richardson, the NFL’s defensive rookie of the year in 2013, is coming off two solid years with the Browns. He appeared in 794 snaps last season, logging 6.0 sacks on 43 total pressures with a Pro Football Focus overall grade of 71.1.

Losing significant interior pass rush upside with the release of Reed, it’s easy to see a fit with Richardson on paper. He’s a well-rounded 3-tech defensive tackle who should be able to supplement some of the numbers lost with the void left by Reed.

However, a reunion wouldn’t seem very likely considering the way Richardson’s time in Seattle came to an end.

Playing in just one season for the Seahawks after the team scrambled to find a suitable replacement for second-round dud Malik McDowell, the now 30-year old defender put up a solid campaign but failed to live up to the organization’s overall expectations. While his talent level was apparent at times, his numbers didn’t back it up. He put up a career-low 1.0 sack and just three tackles for loss.

Looking for a payday reflective of his whole résumé the following offseason, Richardson wouldn’t find a deal with the Seahawks. Instead, he moved on to Minnesota, where he fared much better statistically and thus, earned himself a three-year deal with Cleveland in 2019.

Even though his production has improved since his lone season with the Seahawks, Richardson hasn’t developed into the perennial Pro Bowl type many expected him to be. Now searching for his fifth team in six years, and at this stage of free agency in a relatively deep remaining defensive tackle class, he’s likely facing a one-year, prove-it contract with hopes of playing well enough to cash in next offseason.

Never say ‘never,’ but with Poona Ford’s extension, the arrival of Woods, and the presence of Bryan Mone and Cedrick Lattimore, Seattle may simply role with what they have at defensive tackle. Richardson would be a fine addition to help solidify the deepest front line they’ve had in half a decade even further, but it’s arguably an unnecessary one, especially with other, more pressing needs along their roster to fill and little cap space to do so with.