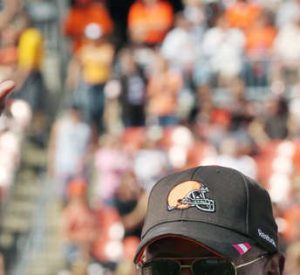 This is one of a series of stories about former Browns and their draft experiences.

Who started in the Browns backfield next to a pair of Hall of Famers? Who often blocked for Leroy Kelly and Jim Brown, yet also made two Pro Bowls?

I open this story with a little background on Green because he is one of the most underrated and least appreciated players in Browns’ history. He was with the team for seven years, rushed for 3,204 yards and also caught 20 touchdown passes.

It was also Ernie Green who helped the Browns after they lost Ernie Davis to leukemia.

Davis was the first African-American to win the Heisman Trophy. He was the No. 1 pick in the 1962 draft by Washington. Browns coach Paul Brown was so enthralled with the idea of teaming Davis and Jim Brown in the Cleveland backfield, he traded future Hall of Famer Bobby Mitchell to Washington for the Syracuse star. Davis then signed the richest rookie contract in NFL history, $65,000 over three years.

But Davis was hit with leukemia before playing a regular season NFL game. He died on May 13, 1963.

PLEASE FILL OUT THIS FORM

In that same 1962 draft as Davis was Ernie Green. He was a star running back at Louisville. You will find several stories saying he rushed for about 1,586 yards in his college career, but not a lot of other information is available.

“NFL teams would send out letters wanting to know your height, weight and time in the 40-yard dash,” said Green. “I never had anyone from the NFL talk to me. I suppose to they talked to (Louisville coach) Frank Camp, but I don’t know for sure.”

The NFL wasn’t a small world in 1962, it was a football village. Teams had few (if any) full-time scouts. Most head coaches also served as general managers. As for those forms, Green joked you could write down anything about your size and 40-yard time. Who was checking? After the top 25 to 50 players, scouting was mostly word of mouth. A scout knew a coach who saw a kid who “looked pretty good.”

Green was scouted in person as a third baseman. The Detroit Tigers offered him a chance to start a career in the minors. But he wanted to play football, where there would be no trip to the minors.

“I knew the NFL draft was happening and I thought I’d be picked,” said Green. “But there was no way to follow it. I don’t think teams even had a phone number for me.”

THIS IS COACH LOMBARDI

It was a member of the Louisville coaching staff who let Green know he was drafted – by the Green Bay Packers. While Ernie Davis was the top pick in 1962, Ernie Green was the last pick in the 14th round – 196th overall.

“I eventually talked to Coach (Vince) Lombardi, and then one of his assistants,” said Green. “They told me about being picked in the 14th round. They told me when training camp opened.”

His contract was a $1,500 bonus, a salary (not guaranteed) of $8,500 and a chance to go to Green Bay. When he joined the Packers, the backfield was crowded starting with future Hall of Famers Jim Taylor and Paul Hornung. They also picked running back Earl Gros in first round (No. 14) in the same draft as Green. Add in solid veteran Elijah Pitts, and there was no room left.

“This was back when an NFL team would play a team of college All-Stars in Chicago,” said Green. “We were going by bus and rookies were on the same bus with the coaches.”

As Green got on the bus, he heard Lombardi tell an assistant coach, “It’s a shame that kid will never get to play again.” Later on, Green realized Lombardi was talking about Ernie Davis.

Most fans don’t know Lombardi worshiped Paul Brown, whom Lombardi credited with helping him become the Packers’ head coach. Early in Lombardi’s career, he received a call from Brown. The veteran coach had a couple of defensive players who weren’t going to make the Cleveland roster. Brown said, “They’ll help you.”

In 1962, Lombardi was going to return the favor.

According to legendary Plain Dealer sportswriter Chuck Heaton: “Vince called Paul at Hiram College one August afternoon. ‘I have a rookie who can help you,’ he said. ‘The kid’s name is Ernie Green. … He isn’t going to make our team, but he’s good enough to play in the league.’”

In a 1964 story, Heaton characterized Paul Brown as “being desperate for a running back. … Paul said, ‘Send him along.’”

Green came to the Browns for a future seventh-round pick.

“PAUL BROWN AND I ARE VERY GOOD FRIENDS”

There is another part of the story. Brown knew nothing about Green, other than he played at Louisville. But Brown’s top assistant was Blanton Collier, who had coached at Kentucky. He called Louisville coach Frank Camp, and Camp gave Green a strong endorsement.

The deal was made. Meanwhile, the Packers were playing a preseason game in Dallas. Green received word to go to Lombardi’s hotel room.

“I kept thinking they were sending me home,” said Green. “I was cut.”

Green knew he looked “shaky” as he met the coach.

“This is a numbers game,” said Lombardi. “I’m going to trade you to Cleveland. Paul Brown and I are very good friends. In fact, Paul talked me into taking this job.”

With that, Green went to Cleveland. When he arrived, Paul Brown said, “Welcome to the Browns. We understand you can play. Get yourself together and get ready to play.”

“But that was all he said,” recalled Green.

“If your name wasn’t on the list or a coach didn’t get you, then you were OK,” said Green. “No news was good news.”

But Green’s heart raced and his throat became dry a few times checking that list before finally making the team. He didn’t play much as a rookie, the Browns going with Charley Scales and Tommy Wilson next to Jim Brown. Cleveland was 7-6-1 that season. When it was over, owner Art Modell fired Paul Brown.

Collier became the new coach and that was a huge break for Green, taking over next to Jim Brown.

“I was there to block and catch the football,” said Green. “My skills were complimentary to Jim’s. The few times I ran the ball, I ran it pretty well.”

Green averaged 4.8 yards per carry during his seven-year career.

“That sweep we ran so much,” said Green. “If I didn’t block the defensive end or the linebacker, it would be blown up right away. I got a big kick out of doing those kinds of things. … If you look up Jim’s or Leroy Kelly’s history, I was in the backfield with both of them. I believe in my heart I played a key role in helping them get them (to the Hall of Fame) because that was my job.”

Green grew up in the Jim Crow south of Columbus, Georgia. He was the president of his high school class, a member of the national honors society. He graduated from Louisville with honors in business.

A knee injury cut his career short at the age of 30. Green formed Ernie Green Industries (EGI) in Dayton. It eventually grew plants making wheel coverings and other devices. He splits time between Dayton and Florida.

“To this day, I still have my season tickets,” he said. “I loved playing for the Browns. The fans are super. I still receive mail 3-4 times a week from Browns fans. The Browns are like one of my children, I love them no matter what.”

Inside story of why Browns signed Jadeveon Clowney

Remember the Trevor Bauer deal, how does it look now?

Terry’s Pluto Cavs Scribbles: Hope for the future or not?

Heading into Year 4 with Baker Mayfield, how does it look? Terry’s Talkin’ Browns

Riding out a tornado, some frustrating calls and welcome to the NFL draft

Talking to myself about some former Tribe players

Hey Terry, is this a make-or-break year for Joe Woods? What about OBJ?