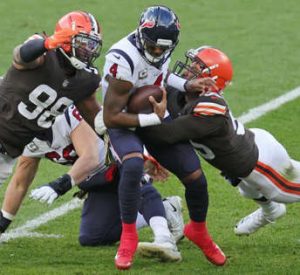 CLEVELAND, Ohio — The Browns released Sheldon Richardson on Friday. Richardson’s two seasons in Cleveland were productive and he played a key role in the team’s rise to an 11-5 season and a playoff appearance. He will go down as one of former GM John Dorsey’s best signings.


Richardson was a favorite of fans, a favorite in the locker room and a good player, so it’s hard to see how a team with Super Bowl aspirations could just let him go.

Sometimes it’s about the money

The NFL’s salary cap is generally something teams find ways to manipulate, but it does exist and it is something teams need to be mindful of when navigating roster building. The Browns are saving $12 million with this move and it allows them to gain a little extra flexibility this year or roll it over to next.

Richardson’s contract was always one to keep an eye on and, even last offseason, it wasn’t a reach to think 2020 could be his last year in Cleveland. The opportunity to add Jadeveon Clowney ultimately made it a reality.

Eventually we’ll see a bigger picture on how the Browns use this money and flexibility and we’ll see if the savings were worth it.

On top of this, the allocation of the Browns’ money right now is a little out of whack, considering they have players at premium positions on rookie, cost-controlled contracts. It allows the Browns to spend big dollars in spots where they normally might not. This is, in some ways, a step towards correction as players at high-value positions like Baker Mayfield, Denzel Ward and, eventually Jedrick Wills and others begin to cost more.

The question is out there about whether fans would rather have Clowney or Richardson — and it makes sense, given Clowney’s cost likely forced the Browns’ hand — but it was really the signing of Malik Jackson that should have sent up the warning flares.

Jackson just turned 30 in January, while Richardson will turn 31 in November. As someone pointed out to me on Twitter, their PFF grades are similar. Up until last season, Jackson has been a slightly better pass rusher — excluding 2019 when he was out with a Lisfranc injury.

Both players also possess the ability to play inside and outside.

According to overthecap.com, Jackson carries a cap hit of just $1,841,544 this year.

Did the Browns directly choose Jackson over Richardson? Probably not, considering both were on the team until Clowney signed. But when you’re staring at the meme where Spider-Man is pointing at Spider-Man and one of them costs $10 million more than the other, you might have to make a hard choice.

The other players in the room and on the line

Let’s put it this way: Andrew Berry didn’t draft Jordan Elliott to be an afterthought. Elliott, a third-round pick, was actually PFF’s 21st-ranked player in the entire draft last year. He managed to get on the field for 350 relatively quiet snaps, but it’s safe to assume the Browns would like to see more of the Missouri product.

Andrew Billings is an intriguing young player coming back after opting out of the 2020 season. We’ve mentioned Jackson. Then there’s the draft where Berry could use one of his nine picks on another interior defensive lineman.

To top it off, the Browns have edge players who can move inside, starting with Clowney. Let’s not forget, Myles Garrett’s first career sack came on a third-and-5 lined up in 3-technique.

Richardson is still a good player, for starters. He’s still productive as a rusher up the middle who finished second on the team two years in a row behind Garrett in pressures and hurries.

He’s reliable. He played in all 32 games in his two years in Cleveland and has played in at least 15 games every season going back to 2016.

He’s a good teammate. Before the pandemic shut down open locker rooms it was clear in the tiny window we got to see behind the scenes, Richardson was beloved across the room. Players from every position group gravitated towards him. He played a key role in holding things together after the Garrett-Mason Rudolph incident.

This is life as a contender with a lot of talent. Sometimes players you like get let go, even if they’re still valuable and can help you win.

It can make sense. You can understand it and even justify it. You don’t have to love it.