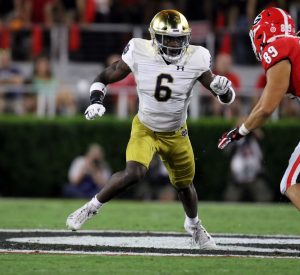 The Cleveland Browns will have a decidedly different look on defense in the 2021 season.

Toss in the expected return from injury by cornerback Greedy Williams and safety Grant Delpit, and that is a eight new chess pieces for Woods to incorporate into the defense once the coaches and players are able to hit the practice field.

That is before the 2021 NFL Draft, where general manager Andrew Berry is widely expected to use the team’s first-round selection on another player for the defense. With the Browns currently slated to select at No. 26 it is hard to predict just which players will be available, but thanks to Berry signing the majority of this year’s group of free agents to one-year contracts or contracts with voidable years, position flexibility is the theme of this year’s draft.

We are less than two weeks away from this year’s draft, so let’s take a run through a variety of mock drafts and see just who could be the latest addition to Cleveland’s revamped defense.

Jeremiah Owusu-Koramoah, LB, Notre Dame: Cleveland has done an impressive job of overhauling its roster, and the team heads into the draft without many holes in need of immediate attention. Jeremiah Owusu-Koramoah has elite quickness and speed for a linebacker, and he also earned one of the best PFF coverage grades in the nation in the slot, regardless of position. JOK could bring some elite versatility to the Browns’ coverage unit.

Dane Brugler at The Athletic (paywall):

Greg Newsome II, CB, Northwestern: Although he had only one interception in college, Newsome has 25 passes defended in 21 starts and it was a challenge searching for big plays allowed on his tape. It doesn’t hurt that he tested like an elite athlete with a 4.38 40-yard dash and 6.90 3-cone drill at 6-foot and 192 pounds.

Jamin Davis, LB, Kentucky: Davis is another defender who is rising since the season ended. He’s really only a one-year starter — he started one game in 2019 — but he was tremendous last season with 96 tackles, three interceptions and a sack. Davis was all over the field making plays. He could play any of the linebacker spots for the Cleveland 4-3 defense. The Browns could also target an edge rusher with this pick, even if they do sign Jadeveon Clowney.

Azeez Ojulari, DE, Georgia: Ojulari is a forceful, determined pass rusher who can wreak havoc. The Browns recently signed Jadeveon Clowney to a one-year deal, but Ojulari can be the long-term tag team partner for DE Myles Garrett.

Joe Tryon, DE, Washington: Tryon has a high floor and a high ceiling. His work ethic and motor will prevent him from being a bust. Cleveland gets a potential star opposite Myles Garrett.

Greg Newsome II, CB, Northwestern: We’ve placed edge rushers here in recent mocks, but a corner also could be a great fit. The highly confident and athletic Newsome could vie for a starting role in Cleveland right away if he can beat out Greedy Williams. The Browns know they need to curb the number of big plays they allow in the pass game, and this would be one savvy way to address that.

Vinnie Iyer at The Sporting News:

Azeez Ojulari, LB, Georgia: The Browns need some pass-rush and coverage versatility to support their front and the rest of their linebackers and Ojulari would be great for Joe Woods.

Gregory Rousseau, DE, Miami: The Browns need an edge rusher to complement Myles Garrett and get it here with Gregory Rousseau. Rousseau isn’t the twitchiest, but he can also slide inside on throwing downs. Cleveland’s roster is coming together nicely.

Trevor Sikkema at The Draft Network:

Jaelan Phillips, DE, Miami (after trade up to No. 16): With just five picks in the draft, the Cardinals don’t exactly have the ammo to get aggressive like they were in free agency. With the top cornerback options off the board, they find a way to move back. Cleveland, seeing the chance to pair Phillips with Myles Garrett, jumps at the chance to move up and increase their winning window.

What do you think, Browns fans? Does one of the players mocked to the Browns get you going? Or do you have your eye on someone else?

Let us know in the following poll and have your say in the comments.

Who should the Browns select in the first round?