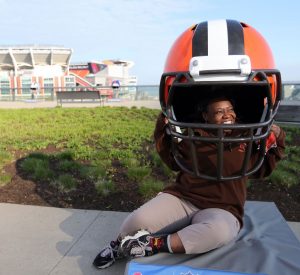 CLEVELAND, Ohio– As the sun crept up over the Cleveland skyline, shining light down on the iconic orange of a giant Cleveland Browns helmet, Bridget Miller Harper worked her way under the face mask for a photo op. Michael Harper snapped a shot as Bridget smiled from within.

The Browns helmet is one of 32 oversized versions on Mall C, representing all 32 NFL teams, one of many activities that will be featured downtown for the NFL Draft.. Fans are free to walk among the helmets, find their favorite team and have their photos taken with it.

Cleveland is a flurry of activity as the city prepares to host this year’s NFL Draft, beginning April 29 and wrapping up May 1.

The draft will be held in three locations in downtown Cleveland: FirstEnergy Stadium, the Rock & Roll Hall of Fame and the Great Lakes Science Center, with an accompanying Power of Sport Summit at Progressive Field. Amid those locations is the main stage currently being erected at North Coast Harbor, with the iconic Lake Erie as its backdrop.

The main stage serves as the central hub of this year’s festivities. There, NFL Commissioner Roger Goodell will announce the team picks and greet top selections as they open a new chapter in their football careers. The NFL will continue their virtual draft as well, with additional prospects participating remotely from their homes around the country.

The league will use safety protocols from the Super Bowl fan experiences held in Tampa Bay this past February. The NFL Draft Experience — the NFL’s interactive football theme park — will be free and open to the public around FirstEnergy Stadium during all three days of the draft. Due to capacity restrictions, reservations are required through the NFL OnePass app.