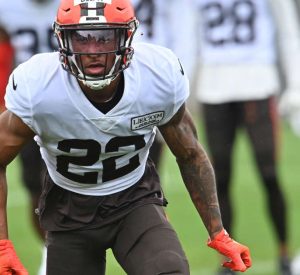 The Browns snagged LSU safety Grant Delpit with the No. 44 overall pick of last year’s draft, which looked to be something of a steal considering Delpit’s upside. Unfortunately, the winner of the 2019 Jim Thorpe Award suffered a torn Achilles during the first week of training camp last August, thereby ending his rookie season before it could even begin.

© Ken Blaze-USA TODAY Sports
Grant Delpit’s rookie year ended before it ever began, as his tore his Achilles early in training camp.


To help fill the void, Cleveland traded for young Jaguars safety Ronnie Harrison, and it had signed Andrew Sendejo before the Delpit injury. Sendejo, however, was one of the worst safeties in the league in 2020, according to Pro Football Focus’ advanced metrics, and he remains a free agent. The Browns did sign former Ram John Johnson in free agency last month, and between him, Harrison — who was PFF’s ninth-best safety — and Delpit, Cleveland will have a young and talented safety corps for defensive coordinator Joe Woods to work with.

But it will still be a while before Delpit can return to the field. The 22-year-old tells Anthony Poisal of the team’s official website that he is a few months away from full medical clearance. “I’ve put so many hours in the weight room,” he said. “That’s just part of life when you’re playing in the league. I’m doing everything I can to get on the field.”

As Poisal writes, Delpit’s recovery timeline should allow him to be ready for the start of training camp. It’s hard to speculate on what his role might be until he gets a couple of weeks of work under him, but his coverage abilities and physicality suggest that he will be a major factor on a team that has made a number of additions to the defensive side of the ball this offseason and that is looking to build on its most successful season since it rejoined the NFL in 1999.

Subscribe to Yardbarker’s Morning Bark, the most comprehensive newsletter in sports. Customize your email to get the latest news on your favorite sports, teams and schools. Emailed daily. Always free! Sign up now ▸