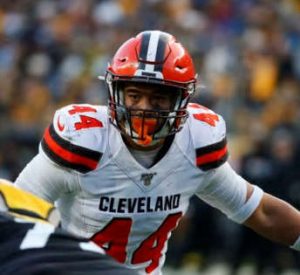 It’s a team that hasn’t won a division title in more than three decades. But these are different times for the much-maligned club from Ohio.

It’s a team that has emphasized defense this offseason when it comes to upgrading its roster. And this was already talented Cleveland Browns’ club led by Kevin Stefanski, the 2020 NFL Coach of the Year. His squad is coming off the franchise’s first playoff appearance since 2002. The Browns upended the Steelers and then gave the Super Bowl-bound Chiefs a fight.

So which five emerging players bear watching this year? The franchise is in pursuit of a division title for the first time since 1989 and some breakout performances and could elevate the team to the top spot in the AFC North.

One of the league’s more balanced attacks this past season benefitted from solid offensive line play and a group up front that got better as the year progressed. Kevin Stefanski’s team ranked 16th in the league in total offense and only the Ravens and Titans gained more yards per game on the ground.

Quarterback Baker Mayfield threw more than three times as many touchdown passes (26) as interceptions (8) and was sacked only 26 times. The Browns turned over the ball just 16 times compared to 28 miscues in 2019.

First-round tackle Jedrick Willis Jr. started 15 regular-season contests and two playoff tilts for his club. Via Pro Football Focus (subscription required), he had his share of penalties and needs work on his run blocking. But all fixable with 2021 on the horizon.

His rookie campaign in 2019 saw him play in 15 contests with only one start. He finished the year with 16 defensive stops and added five tackles on special teams. In 2020, he played a much bigger role for defensive coordinator Joe Woods.

In his second year, outside linebacker Sione Takitaki played in the same amount of contests but made dozen starts. He finished seventh on the club with 55 defensive tackles, one sack and a 50-yard interception return for a touchdown in the team’s win over the Eagles. The 2019 third-round pick from BYU also came up with an additional 12 stops on special teams – eight of those of the solo variety.

This offseason, the Browns added rangy middle linebacker Anthony Walker Jr. from the Colts via free agency. He comes over from the league’s second-ranked defense in 2020, a team that allowed the second-fewest rushing yards in the league. He amassed 100-plus tackles in 2018 and ’19 and 91 defensive stops this past season. And his presence on Woods’ unit could make life a lot easier for Takitaki.

It’s not as if the Cleveland Browns are hurting when it comes to the wide receiver position. The team features the tandem of Jarvis Landry and Odell Beckham Jr. While the former comes off a season in which he led the club with 72 grabs and 840 receiving yards, the latter saw his season cut short after seven games. In those contests, he totaled 23 catches for 319 yards and just as many TD receptions (3) as Landry.

The team’s second-leading pass-catcher from the wide receiver spot this past year as Rashard Higgins (re-signed this offseason), who finished fourth on the club with 37 receptions, while his 599 yards were second only to Landry. And he reached the end zone with four touchdown grabs. Higgins combined for seven catches for 116 yards in the playoff split with the Steelers and Chiefs.

But keep an eye on Donovan Peoples-Jones, who was not only the team leader in punt and kickoff return yardage but flashed big-lay ability as a wideout. He caught just 14 passes but for 304 yards and a pair of touchdowns in a dozen regular-season outings. And he could see more time on offense in his second NFL season.

Back in 2017, the Browns made three first-round selections in defensive end Myles Garrett, safety Jabrill Peppers and tight end David Njoku. They moved back into the first round via trade on that Thursday night to acquire the former University of Miami (FL) standout. In his first two years, he played in all 16 games in each of those seasons and combined for 88 receptions, totaling 1,025 yards and eight touchdowns.

It’s been a much different story since 2019 as the former Hurricane has missed a combined 15 contests – 12 of those in ’19 – and the falloff has been evident. Njoku has just 24 grabs for 254 yards and three scores in his last 17 games. He totaled a combined five grabs for 66 yards and zero scores in this past season’s playoff split with Pittsburgh and Kansas City.

Meanwhile, the Browns used a fourth-round pick last April on Harrison Bryant. The Florida Atlantic product played in all but one regular-season game and made nine starts. He finished with 24 catches, good for 238 yards and three TDs.

However, he did not catch a pass in the playoffs. The 2020 addition of Austin Hooper was another reason for Njoku’s decline but the four-year pro could net the Browns a draft choice or two. And Bryant could up his numbers significantly with an improving Baker Mayfield and alongside Hooper for a second straight year.

He’s one of many newcomers for the Cleveland defense as general manager Andrew Berry focused on this side of the ball throughout free agency. The team finished a so-so 17th in the league in total yards and to its credit, the Browns finished ninth in the NFL against the run just one year after allowing the third-most rushing yards in the league.

But shutting down opposing quarterbacks was a problem throughout the year. The club was 22ndd vs. the pass and allowed nearly twice as many touchdown passes (31) as rushing scores (16). The signing of former Rams’ safety John Johnson III was a major coup. But the addition of Los Angeles’ teammate/cornerback Troy Hill (his grades via Pro Football Focus) is notable as well.

The former Cincinnati Bengal spent the past five seasons with Sean McVay’s team. He comes off a year in which he played and started in 16 games for the first time. He finished tied for second on the club with 77 tackles, led the club with 10 passes defensed and returned three of his five takeaways for touchdowns.

The recent release of well-traveled veteran Sheldon Richardson was somewhat of a surprise but many of the Browns’ additions appear to offer a lot of promise. Teamed with former first-round pick Denzel Ward, Hill could be on the verge of even bigger things in 2021.