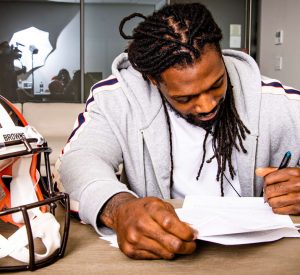 Over the next two weeks, as the 2021 NFL Draft gets closer and closer, we’re spotlighting a different position group each day at ClevelandBrowns.com.

Our Road to the Draft series will dive deep into the top players available at each position group. In this series, we’ll be analyzing what the Browns have on hand and how that may affect the team’s decision making with its nine selections.

We’re continuing with the defensive ends, a position that saw quite a bit of change since the start of the new league year.

What’s Happened: Well, a lot. Veteran Adrian Clayborn was released before the start of the new league year and Olivier Vernon remains a free agent. They combined for 12.5 sacks and played hundreds of valuable snaps throughout the 2020 season. Cleveland responded accordingly in free agency, first with the signing of Takkarist McKinley and then with last week’s addition of three-time Pro Bowler Jadeveon Clowney. Both players are loaded with talent and looking for redemption from their respectively frustrating 2020 campaigns. Additionally, the Browns re-signed Porter Gustin, who was an exclusive rights free agent. Gustin was a valuable member of the rotation all throughout last season.

Where that leaves things: …and then there’s Myles Garrett. Arguably the league’s best player off the edge is coming off a 2020 All-Pro season in which he racked up 12 sacks and found himself at the center of some of the defense’s biggest plays of the year. He’s hitting his prime, and the Browns are working to ensure he’ll be surrounded by players who can help make his job JUST a little easier. Garrett will draw the double teams — there’s no questioning that — but opponents may have to think twice about it if Clowney, McKinley or both tap into the relentless danger they’ve displayed at points throughout their respective careers. The Browns also have three other faces in the room at the start of their offseason program: Joe Jackson, Cameron Malveaux and Curtis Weaver. Jackson and Malveaux saw limited action last season while Weaver, a 2020 fifth-round pick of the Dolphins, spent the year on injured reserve.