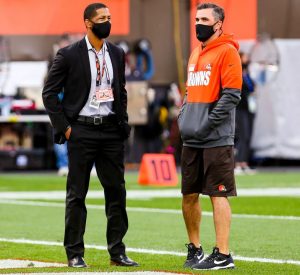 Kevin Stefanski is nine days away from orchestrating his second NFL Draft as head coach of the Browns, and he can already say that this one will be much different than his first.

First, the setting — Stefanski will complete the draft from inside his office at the team headquarters in Berea. Last year, he was in Minnesota, his former home as an offensive coordinator with the Vikings, as COVID-19 delayed his move-in plans to Cleveland.

The Browns have plenty of that in their coaching staff and front office after the first year under Stefanski and Executive Vice President of Football Operations and GM Andrew Berry. Nearly all team personnel are back this season after their successful run to the playoffs in 2020.

The process finally feels a bit more normal for Stefanski, who coached the Browns through a season that contained almost no normalcy in 2020.

“I think Andrew Berry and his staff have done an outstanding job,” Stefanski said Tuesday in a video call with local reporters. “To date, we’ve had some really good discussions and have been a really collaborative group. I think the coaches have contributed to that, so I think we’re really pleased with where we are.”

Cleveland’s draft position and possibilities will be much different for Stefanski, too.

The Browns are slated to make the 26th overall pick of the draft, their deepest pick in a first-round since 1995, and have been heavily mocked to target a defensive position in the first round. Those projections have persisted despite the additions the Browns have already instilled to their defense, which has been refurbished with six free agents.

S John Johnson III, CB Troy Hill, DE Takkarist McKinley, LB Anthony Walker, DT Malik Jackson and DE Jadeveon Clowney are new veteran acquisitions that addressed each level of the defense, and they should help the Browns achieve a variety of defensive looks in 2021 that should pose big challenges for opposing offenses.

“We’re trying to make ourselves a better football team,” he said. “I think Andrew saw some opportunities to add players to this roster. We feel like we’ve gotten better on the defensive side of the ball, and we’re creating competition.”

Stefanski, of course, didn’t reveal anything about which direction the Browns are leaning to improve that competition with the draft. He might not know anyway — at pick No. 26, the Browns will have plenty of waiting to do before they’re on the clock.

And when the Browns’ logo finally flashes on the screen next to the 10-minute timer, the Browns will own a luxury many teams won’t have.

With the success of their free agent pursuits, the Browns can opt to take a “best player available” approach to their first-round pick and let their draft board decide who to take. That’s a stark contrast from a year ago, when it appeared to be a foregone conclusion that the Browns were going to select an offensive tackle weeks before the draft began.

Those decisions tend to be easier for a head coach and front office when a team completes a winning season and books a trip to the playoffs.

Thanks to that success, the Browns are in a comfortable spot. All coaches and front office personnel are back and on the same page for how to tackle their second draft, and they’ll be able to do it — albeit still virtually — in the same building for the first time.

“We want that collaborative spirit to constantly be part of what we do,” Stefanski said, “and I’ve already seen it in our preparations at this point.”