Home » Cleveland Browns » No. 110 pick Don Shula sneaked around his mom and into the Hall of Fame 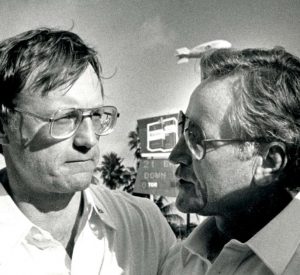 Coming off the most promising season since the Marty Schottenheimer era, the Browns look to the 2021 draft to fortify the next step in the Kevin Stefanski era.

It is a given the Browns must score with their first-round pick, but they can further help themselves if they find a few good men from among their eight scheduled picks outside Round 1.

Over time, all eight of those post-Round 1 slots where the 2021 Browns own picks have produced someone who became famous.

In Part 3 of a series, we touch on the first of the Browns’ two scheduled spots in Round 4 on assorted levels, with the aim of putting Cleveland’s 2021 pick at No. 110 overall in perspective.


Odds are a million to one against this year’s No. 110 going down in history with fame remotely approaching Don Shula’s.

More: Don Shula: An Ohio rock in the river of football

But then, what were the odds young Don was going anywhere when he enrolled at Painesville Harvey High School, forbidden by his mother to play football?

A gym teacher who noticed Shula climbing rope like a cat urged him to play the rough-and-tumble sport. Don turned in a football form on which he forged his parents’ signatures. Eventually, his mother forgave him.

Shula learned the football ropes at Harvey and then in college at John Carroll, but he remained a virtual unknown as a 1951 Browns rookie.No. 110 pick in 1951.

One day at practice, he woke from a stupor after tackling gigantic fullback Marion Motley, and found the head coach standing over him..

Making the team from where Shula got drafted was like winning the lottery. To a veteran core that won the 1950 NFL championship, the Browns added an incredible 36 1951 draft picks. The NFL roster limit for 1951 was 33 players.


Brown, a notorious wheeler dealer, traded Shula in 1953 to the Baltimore Colts, who were a strange story unto themselves. The Colts essentially were the Dallas Texans, who went 1-11 in the 1952 NFL season and then folded.


The 1952 season in Dallas was such a wreck that the team moved operations to Hershey, Pa., in November. Stranger still, the Texans’ final “home game” was played at the Akron Rubber Bowl on Thanksgiving Day. It produced the season’s only win, over the Chicago Bears.

New ownership in 1953 acquired all of the Texans’ holdings, set up shop in Baltimore, and included Shula as part of a roster overhaul. Incidentally, on Sept. 7, 1953, the new Baltimore Colts played a preseason game against the Browns in the Rubber Bowl. The crowd was 10 times larger than the one for the Texans-Bears game.

Shula became a decent NFL player, starting for the Colts at cornerback for four seasons, the last three under head coach Weeb Ewbank, who had been a Browns assistant.

In 1963, at age 33, Shula became head coach of the Colts, succeeding Ewbank. Shula respected Brown and Ewbank but counted another former Browns assistant, Blanton Collier, as his most influential mentor. In 1964, Shula’s Colts lost to Collier’s Browns in the NFL championship game.

More: Remembering when it was ’64 and the Browns were winners

After the 1995 season with the Miami Dolphins, Shula retired with 347 career NFL wins (including 19 postseason), the most all-time.

Notable No. 110s: Cornerback Don Shula (Browns, 1951) was drafted onto a team whose veteran starters at the corners were Tommy James and Warren Lahr. … RB Leroy Kelly (Browns, 1964) followed Jim Brown as Cleveland’s top back. He led the NFL in rushing on a Browns team that reached the 1968 NFL title game. He entered the Pro Football Hall of Fame in 1994. … WR Ray Perkins (Colts, 1967) played against the Browns in the 1968 NFL title game during a five-year pro playing career. In 1983, he succeeded Bear Bryant as head coach of the Alabama Crimson Tide. … Guard Conrad Dobler (Cardinals, 1972) went to three Pro Bowls and made a name as “the dirtiest player in football.” … Defensive end Greg Townsend (Raiders, 1983) produced 110 career sacks, 23rd all-time. … QB Seneca Wallace (Seahawks, 2003) went 1-6 as a Browns starter in 2010 and 2011.

Last three No. 110s: Cornerback Darnay Holmes (UCLA/Giants, 2020) became a starter midway through his rookie season and picked off Russell Wilson in a 17-12 win at Seattle. … Punter Mitch Wishnowsky (Utah/49ers, 2019) kicked in the Super Bowl as a rookie and had a strong 2020. … Cornerback Nick Nelson (Wisconsin/Raiders, 2018) got cut before the 2019 season.


More: NFL draft Revue: A Hall of Famer and other fun faces from where the Browns pick in Round 2

Four-year report: WR DeDe Westbrook was the 110th pick in 2017 (Jaguars) after teaming up with Baker Mayfield for 1,524 yards and 17 TDs at Oklahoma in 2016. Mayfield called Westbrook “the best player in the country.” Westbrook gave the Jaguars 66 catches acros the 2018 and 2019 seasons before regressing in 2020, eventually tearing an ACL. He is an unsigned free agent.

Five-year report: The Rams made Western Kentucky tight end Tyler Higbee the 110th pick in 2016. His play through three seasons earned him a four-year, $31 million contract extension. He responded with a 69-catch season in 2019 but retreated to 44 catches in 2020.

Next: The Browns have a second pick in Round 4, and it corresponds to one of the Stark County’s most interesting sports stories.

This article originally appeared on The Repository: Browns draft Revue: No. 110 pick Don Shula sneaked around his mom and into the Hall of Fame