Home » Cleveland Browns » Should the Browns trade up, down or not trade at all? 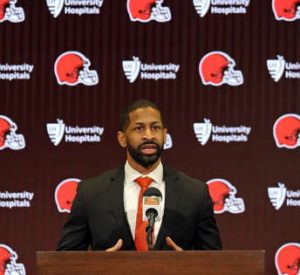 CLEVELAND, Ohio — The Browns will have a decision to make next week and it’s more than just which player they will take at No. 26. In fact, it’s whether they even take a player at No. 26.


GM Andrew Berry has been aggressive adding talent to the roster over the last two offseasons and it wouldn’t be surprising if he had a specific target in mind and is willing to get where he needs to go to pick his player. The way the draft falls is out of his control and there is likely a spot too far up to move, but the Browns have nine picks this year and the idea of going and getting “your guy” in the first round is appealing.


The other scenario is the draft simply doesn’t fall the way the Browns want it to fall. By the time they go on the clock, there simply isn’t a match between need and value at No. 26. Would Berry decide to give up the pick and move back into the second round if he could add additional picks in 2022 or beyond? Draft capital is important for a team whose roster is going to begin getting expensive in the next few years.

Or maybe things just fall perfectly and the Browns sit tight at No. 26 and get their guy, much like they did last year at No. 10.

Tim Bielik joined Dan Labbe on Wednesday’s Orange and Brown Talk Podcast to answer Football Insider questions which included trade talk, ranking corners and even some talk about drafting your backup quarterback of the future. (Is that a thing?)

You can listen using the player below or, if you can’t see the player, by clicking here. You can also listen and subscribe to the podcast using the links below.

Could Sheldon Richardson really end up back in Cleveland? Hey, Mary Kay!

Terry Pluto on Kevin Stefanski and what’s next for the Browns; MLB.com’s Mandy Bell on the Indians: Tuesday’s ‘Sports 4 CLE’

Inside Jadeveon Clowney’s signing and Sheldon Richardson’s release and why you should stay tuned: Browns Insider