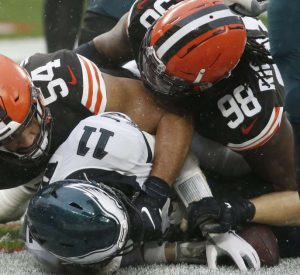 All is quiet right now on the Browns draft front, but that was not the case five years ago. On this date, April 20, back in 2016, the Browns made a massive trade with the Philadelphia Eagles.


It’s commonly known as the “Carson Wentz” trade now, for the Eagles aggressively moved up from No. 8 overall to acquire the Browns pick at No. 2 overall in the 2016 NFL draft.

The Eagles dealt the No. 8 pick, a third-round pick and a fourth-round pick in 2016, as well as their 2017 first-rounder and a 2018 second-round pick to jump up so they could ensure they were getting Wentz.

The trade wound up having a freaky amount of tentacles that are still not fully unraveled. The Browns traded the No. 8 pick to Tennessee and dealt several of the other picks. It’s a string we previously unraveled in a lengthy tracker of all the trade outcomes.

The Eagles traded Wentz to Indianapolis this offseason after the luster badly burned off his rising star.

Grant Delpit: ‘I’m doing everything I can to get on the field’