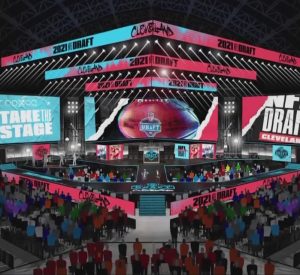 CLEVELAND — Members of the NFL, Greater Cleveland Sports Commission and Cleveland Browns held a virtual press conference on Wednesday morning to discuss community engagements throughout Northeast Ohio that will take place as a part of the 2021 NFL Draft.

The various community projects — which will focus on pandemic recovery, education, youth football, volunteerism, social justice, diversity, equality and inclusion — are expected to “create a long-term positive impact throughout the region that will extend beyond the weekend’s other exciting activities.”

“With the pandemic this year, more and more people are in need of food on a daily basis,” league representative Melissa Schilling said.

Schilling connects the NFL with communities all across the country to use its major players, platform and, of course, money to leave lasting positive legacies wherever the league goes.

“We’re really excited to be in Cleveland next week and to just engage with the community and just help out where we can,” she said.

Last month, the NFL officially announced its plans to host its draft in downtown Cleveland after holding last year’s draft — which was originally scheduled to take place in Las Vegas — virtually due to the coronavirus (COVID-19) pandemic. The three-day event will take place at three historic Downtown Cleveland locations: FirstEnergy Stadium, the Rock & Roll Hall of Fame and the Great Lakes Science Center, with a select number of prospects, fans and media permitted to attend.

To kick off Draft Week, the NFL will make a $35,000 donation to the Greater Cleveland Food Bank and hand out NFL-themed items to folks receiving fresh produce and shelf-stable food. The league will also host events focused on environmental sustainability and repurposing event materials during Draft Week to leave a positive “green” legacy in Cleveland, Schilling added.

“A lot of projects are tied to creating community gardens, planting new trees, one tied to helping to close the digital divide,” she noted. “We’re working with the Legal Aid Society to come in and create a library and bring technology there. There are some youth football related events for kids to enjoy.”

Watch the entire press conference again in the player below: