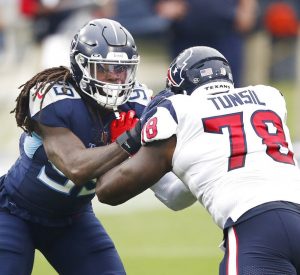 Clowney disrupts the running game like few others. He uses his quick-twitch, play recognition and refined-move set to chase quarterbacks as well.

On this week’s Gotta Watch the Tape, Ellis L. Williams breaks down six key Clowney plays that highlight his disruptive style. Then Scott Patsko details other changes GM Andrew Berry is making to the defensive line and what his choices reveal about team building philosophy.

Twice a week, we dive into the film and the numbers around two major issues with the Browns. Patsko and Williams drive the discussion, with each focusing on one topic to investigate in each podcast. Lesmerises hosts and asks the questions that readers and listeners might have for these smart football analysts — what do you mean and why does this matter?

Lamar Jackson to Cameron Heyward: The best first-round NFL Draft picks at No. 26 or later in last decade

Should the Browns trade up, down or not trade at all?