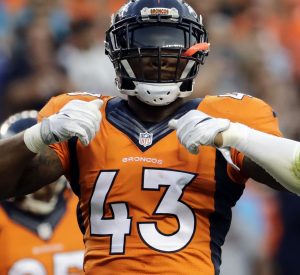 Two-time Pro Bowl safety T.J. Ward, who won Super Bowl 50 as a member of the Denver Broncos, announced his retirement from the NFL on Wednesday.

Ward, who also played for the Cleveland Browns and Tampa Bay Buccaneers across eight seasons, posted a statement on Instagram:

“Curtains! For everything this game brought me I am forever grateful, to the fans I gave my all too, to the teams I gave my all too. To my family who gave there all to me through all the ups and downs, I thank you from the bottom of my heart. I am blessed to have played 8 amazing years in this league and to have left the game in a better place then where I found it. With that being said I am announcing my official retirement from the National Football League. I look forward to continuing to become the best father and person that I can be, to continue to create impact in my communities through my foundation. I salute to the ending of a chapter, but I am excited for all that we will achieve ahead! Blessed Morning!”

For everything this game brought me I am forever grateful, to the fans I gave my all too, to the teams I gave my all too. To my family who gave there all to me through all the ups and downs, I thank you from the bottom of my heart. Blessed 8 years! #wardcorp https://t.co/7OofnBEReI

The 34-year-old California native spent part of the 2020 season on the Arizona Cardinals’ practice squad but hadn’t appeared in a regular-season game since 2017 with the Bucs.

Ward was a second-round pick of the Browns in the 2010 NFL draft after a standout final two college seasons at the University of Oregon.

The safety made an instant impact in Cleveland with 123 total tackles as a rookie, which ranked 14th in the league, along with 10 passes defended, two interceptions and a forced fumble.

After four years with the Browns, he signed with the Broncos in 2014 and became a part of the team’s vaunted “No Fly Zone” secondary alongside Aqib Talib, Chris Harris Jr., Bradley Roby and Darian Stewart.

Although most of the focus during the team’s 2015 championship run was on legendary quarterback Peyton Manning, who retired after the Super Bowl win, the defense was the driving force in leading the franchise to its third title.

“That was our mission to become legends, to become staples in this organization,” he said. “When you speak of the Denver Broncos, you can’t speak about it without talking about that team.”

Congratulations on your retirement, @BossWard43!

Ward left Denver after three seasons and played 12 games for the Bucs in 2017. He sat out the next two years before the brief comeback attempt with the Cardinals last year.

He finishes his career with 607 tackles, 44 passes defended, 10 forced fumbles, 8.5 sacks, eight interceptions and two touchdowns across 107 regular-season games. He added 19 tackles and an interception in four playoff appearances.