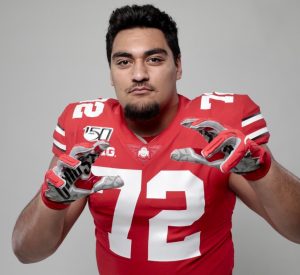 Cleveland opted to release Sheldon Richardson just a few days ago and it opened up about 10 million dollars in cap space. It’s to early to tell what the Browns have planned at the defensive tackle position. One option is an available free agent, another being a player moving up on the depth chart.

A very real option for the Browns could be addressing the issue in next week’s NFL Draft. Overall, it’s a weak defensive tackle class. There are some bright spots where Cleveland could make a solid pick at tackle, though.

Tommy Togiai appeared in 22 games for the Ohio State Buckeyes over a three year span. Togiai played very well his junior season as a run stopper and even got after the quarterback a bit. At nearly 6-foot-2 and 300 pounds, Togiai is a load in the middle and could be a solid option for Cleveland. A potential player that brings a decent amount of upside.

Browns Digest caught up with Togiai who has been diligently working since the college season ended.

“I’ve been really working on using my hands more in my pass rush and releasing off of blocks more efficiently.”

In his final season at Ohio State Togiai recorded three sacks and four and a half tackles for loss.

When you play defensive line for the Buckeyes, you’re going to rotate due to the abundance of talent they have. Sometimes numbers aren’t daunting, but the tape speaks for itself. In his time in Columbus, Togiai got to learn from some very good players.

“Having great teammates when I first came in definitely played a role on how I’ve been able to do. Getting all the advice and tips I could from the old heads at the time like Davon Hamilton and Dremont Jones, even Chase (Young). Seeing how they prepared and went to work helped me a lot.”

Togiai put up big time numbers at his pro day that included 40 reps on the 225 pound bench press. Those numbers would have led the combine last year, for example. The numbers only helped Togiai’s case as one of the stronger players in the middle.

“A couple of teams after my pro day mentioned my bench press and the rest of my pro day stats. I thought I did well for myself,” said the soon to be professional.

Togiai is a player that is confident in what he can do and what he brings to the next level. “I think an instant impact I would have is in the run game, I play with strong hands and lock out well,” said the tackle prospect.

Togiai noted he has met with one scout from the Cleveland Browns, as well as a member of the Baltimore Ravens as another AFC North notable. Cleveland will have options at defensive tackle, though there may not be a ton that brings to the table what Togiai can.