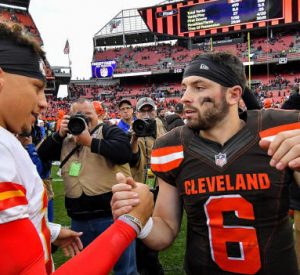 Turns out, betting on Patrick Mahomes to throw for at least one yard in a playoff game is about as easy a bet as sports gamblers can hope for.

As the Associated Press (h/t ESPN) explained, the New Jersey Division of Gaming Enforcement fined BetMGM.com $500 for a typographical error it made during the AFC Divisional Round game between the Kansas City Chiefs and Cleveland Browns.

BetMGM planned on offering a prop bet on whether Mahomes and Baker Mayfield would each throw for 300 or more yards in the game, but it did not include the three because of a manual error.

That meant all the quarterbacks had to do was throw for a single yard to beat the “00” mark, which led to $10,500 for nine bettors.

BetMGM and Borgata Online ended up paying out the winnings.

Kansas City won the game 22-17 behind 255 passing yards from Mahomes. Mayfield countered with 204 passing yards, so it’s a good thing for those gamblers that the three was not included in the front of the 300-yard totals.