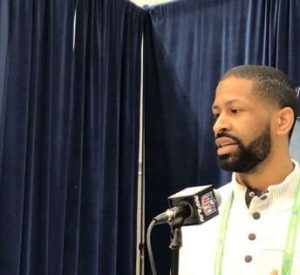 CLEVELAND, Ohio — Browns GM Andrew Berry, on a Zoom call with local media, laid out how he views the draft as an element of team building on Friday morning, repeatedly citing its longterm value. He tried to separate free agency from the draft.


“From my perspective, I think free agency, at least for me, has a lot less of an impact on the draft than it is maybe perceived,” he said.

He also kept coming back to a point about directly filling needs via the draft.

“Need or position of value, all of that can play a role in it, but by no means is it the primary goal and not even close to the primary weighting in terms of the draft decisions,” Berry said. “Honestly, that is how teams make mistakes.”

Or, in other words: “If you are going into the draft looking for maybe a cure-all player, I think that is a little bit misguided.”

If we know anything about this front office and data-driven group, somewhere in the hallways of the Browns’ facility in Berea is likely piles of research backing up Berry’s assertions. A fair amount of it likely cites the Browns’ very own draft history.

This year’s approach is, in some ways, a stark contrast to what Berry faced last year when he made Jedrick Wills Jr. the pick at No. 10 to fill the gaping hole at left tackle. Sometimes need does play a role and it felt most of last offseason like the Browns intentionally left the position open as they filled other areas of the offense in free agency, knowing they were going to pick their longterm solution in the draft. It was a marriage of need and Berry’s core draft philosophy.

“I really think of the draft as maximizing long-term sustainable impact on the team,” he said.

It’s safe to say a left tackle checks that box.

This roster is different than the one Berry inherited in 2020. Yes, it was a talented roster, but it needed tweaking to fit Kevin Stefanski’s vision for his offense. Berry invested big dollars in the likes of Jack Conklin and Austin Hooper, but the draft was going to be a necessary element of completing the build.

This year, with the offensive side of the ball intact, Berry turned his focus to the defense. He added, perhaps, the top available safety in John Johnson III, a slot corner in Troy Hill, a replacement for B.J. Goodson in Anthony Walker, an inside presence in Malik Jackson and an edge rush tandem in Jadeveon Clowney and Takk McKinley to complement Myles Garrett.

Just like we saw a clear vision of Stefanski’s offense before the Browns even took a snap in practice, defensive coordinator Joe Woods’ master plan on defense is coming into focus.

“We always do strive, as a front office group, to make sure that we are building the roster in line with the style of which our coaching staff wants to play,” Berry said. “Ultimately, our personnel staff, we are an extension of the coaches.”

More importantly, Berry hasn’t painted himself into a corner — no pun intended. (Or is it?)

The Browns still have questions at the cornerback spot opposite Denzel Ward. In a best-case scenario, Greedy Williams returns at full strength and becomes the player former GM John Dorsey envisioned when he picked him in the second round two drafts ago. The Browns have big expectations for this year, however, and would be wise to hedge at the position if, for no other reason, they don’t have much depth behind Williams or Ward — who has missed four games every season — unless they want to start the domino effect that comes with moving Hill outside if injuries pile up.

Even at corner, however, the Browns have options and don’t need to get desperate at No. 26. If they get aggressive and move up, we’ll know it’s because they loved the player they traded up to get longterm. If they decide to trade down and accumulate more draft capital, we’ll know it’s because Berry is thinking down the road and has a clear plan for who he wants and where he can get him.

Maybe he even has a bigger surprise up his sleeve, much like the Chiefs who just acquired Orlando Brown from the Ravens to fill their left tackle need. Perhaps Berry has eyes for a veteran cornerback who could become available between now and Thursday night. Whatever he does, it will be a move of conviction and not one of panic.

Berry has put himself in an ideal position to use the draft how he believes it should be used.

“It is less about filling a need or some level of instant gratification on the roster,” he said, “and more about a longer-term focus on the team.”

This season, for various reasons, the Browns will put more weight on players drafted a year ago who saw limited or little to no playing time. Jacob Phillips and Jordan Elliott should see increased workloads. Grant Delpit and defensive end Curtis Weaver will return from season-erasing injuries. It’s safe to assume there will be players in this draft class who might have relatively quiet 2021 seasons but have bigger expectations for future years, just like some of the players from last year’s class.

Berry, like every GM, is going to throw us a curveball at some point. When he was asked directly about the perception this team doesn’t value linebacker, he responded, “I would not read too much into that. I would not let anything define us.”

And, while it still might be unwise to go out and buy stock in a linebacker at No. 26, that’s the beauty of how this roster is put together: Berry has placed himself in a position to do whatever he wants when the Browns go on the clock.