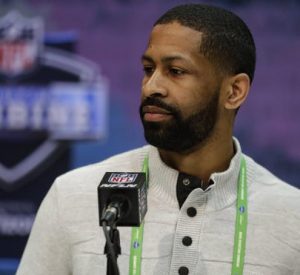 General Manager Andrew Berry is prepared to keep beat writers who cover the Browns waiting, if it makes sense for the franchise.

Armed with the 26th overall selection in the NFL Draft, Berry wouldn’t rule out trading up from the spot late in the first round, standing pat and picking, moving down or even trading out of the opening round altogether.

The draft will begin at 8 p.m. Thursday and run through Saturday. If the Browns were to move down and out of the first round, they wouldn’t pick until the second round on Friday.

“I’m going to guess a quiet Thursday night would not be popular amongst this audience [of beat writers],” Berry said with a smile on Zoom.

1. The Cleveland Browns are open for business in first round

Flexibility is the key word for Berry at No. 26 overall.

“I think the positioning in this draft allows us to be very flexible, whether that’s moving up, down or sitting and picking,” he said. “Largely that will be dictated by how the board falls ahead of us, but I think we have a lot of flexibility.

Teams usually covet first-round picks not only because most of the highest-quality talent is typically acquired in the opening round, but also because the contracts of first-round selections include fifth-year options.

Those fifth-year options have evolved over the years because of changes to the collective bargaining agreement between the NFL and NFL Players Association.

Starting with players selected in the first round of 2018, fifth-year options become fully guaranteed as soon as they’re picked up. For example, Berry exercised the fifth-year options of quarterback Baker Mayfield and cornerback Denzel Ward on Friday morning, guaranteeing their salaries of $18.858 million and $13.294 million, respectively, for the 2022 season.

Players picked in the 2016 and 2017 drafts had their fifth-year options guaranteed only for injury when they were exercised and not fully guaranteed until the start of the league year of their option season. To illustrate the point, tight end David Njoku had reason to celebrate when he remained on the Browns’ roster at 4 p.m. March 17 because it meant the league year had started and the $6.013 million on his fifth-year option had become guaranteed.

Has the fifth-year option turning into guaranteed money as soon as it’s exercised made it a less attractive device for teams and thereby slightly more appealing for them to trade out of the first round?

“I don’t see it as more or less attractive based on the changes with the fifth-year option to be honest with you,” he said. “I think largely if you’re considering moving back, No. 1, it depends what’s on the board and ultimately what you think is going to be available to you depending on how far you move back. And then the second piece is what else you’re receiving in terms of trade compensation for moving out of your original draft slot. So it’s a combination of all those items, at least from my perspective, and much less to do with the changes that we’ve seen in the fifth-year option.”

2. Cornerback landscape could determine whether Andrew Berry trades in Round 1

The Browns have a stacked roster coming off their first playoff appearance in 18 years and first postseason victory in 26 years, but they still have a need at cornerback. And the need for a starting outside corner opposite standout Denzel Ward is actually glaring if Greedy Williams doesn’t successfully rebound after missing all of last season with nerve damage in a shoulder. The Browns are optimistic about Williams’ comeback attempt, but it’s far from a certainty.

All of this points to cornerback being the most logical route for the Browns to travel in the opening round. However, there is a chance the top tier of the position group formed by Alabama’s Patrick Surtain II, South Carolina’s Jaycee Horn, Northwestern’s Greg Newsome II and Virginia Tech’s Caleb Farley won’t last until No. 26.

So would Berry trade up for one of the top four cornerbacks? Or would he wait at No. 26 and trade down if none of them is available?

The Browns probably don’t even know the answers at this point because the offers would need to be on the table first, but it’s reasonable to predict a first-round trade hinges on the cornerback landscape.

“In terms of corners in general, that is a position that you always want to be deep, no different than other positions we have discussed in past sessions,” Berry said. “You can never have enough cover guys.”

Berry revealed the Browns have draftable grades on 114 prospects and deem 54 others worthy of being priority undrafted free agents. He said he usually assigns draftable grades to 115-130 players.

He stopped short of characterizing the strength of the cornerback group by itself.

“I think there are good players across all positions in this class,” he said. “I think it is a good draft class.”

The Browns have an extra pick in the third and fourth rounds, giving them nine choices. With a loaded roster, it would make sense for them to reduce their draft haul at some point by trading up, even if it’s not on the draft’s first night. As expected, Berry wouldn’t go there.

“In terms of nine rookies potentially making the team or being on the roster, no, I don’t really see a problem with that,” he said. “We want to have competition.”

But make no mistake about this: Berry is open for business, and not just with picks, but with veterans on the roster or elsewhere in the league.

“The trade market is something that we always want to be in really year-round,” Berry said.

3. Is there a linebacker who will be the exception to the rule?

Even if the top four cornerbacks are gone by No. 26, maybe Berry would like someone else, like Florida State’s Asante Samuel Jr., enough to still address the position there.

Another option for a stick-and-pick scenario in the first round figures to be linebacker.

Berry has yet to place a premium on the linebacker position since he became GM of the Browns last year, so there is a perception among outsiders that he wouldn’t draft one in the first round, such as Tulsa’s Zaven Collins, Notre Dame’s Jeremiah Owusu-Koramoah or Kentucky’s Jamin Davis.

“I wouldn’t read too much into it,” Berry said when asked about the perception. “I mean, I wouldn’t let anything define us in that regard.”

The Browns like their linebackers, especially with the addition of free-agent pickup Anthony Walker and high internal expectations for 2020 third-round choice Jacob Phillips.

Still, a chance to upgrade with the right player is intriguing, especially if he’s versatile and talented enough to convince Berry to make his first splash at linebacker as a GM.

4. Succession plans a factor at defensive end and wide receiver

Berry quoted his former Indianapolis Colts boss and Hall of Fame GM Bill Polian when he said, “Your needs today are not the same as your needs tomorrow.” Berry added he has found Polian’s frequent saying to be true.

Why does this matter?

Well, because the Browns are in good shape at defensive end and wide receiver this year, yet both positions are candidates to be bolstered as early as the first round.

Free-agent acquisitions Jadeveon Clowney and Takk McKinley signed this offseason to join forces at defensive end with All-Pro Myles Garrett, but Clowney and McKinley are only under contract for the 2021 season.

“I think probably every head coach and general manager in the NFL will tell you they would love to have as many pass rushers as possible,” Berry said. “We’re no different.”

In the receiving corps, Odell Beckham Jr. and Jarvis Landry are under contract for three and two more seasons, respectively, but they will account for a salary cap hit of more than $31 million next year. The combined cost could prove to be too expensive for the Browns, especially with potential extensions for Mayfield, Ward and running back Nick Chubb looming.