Home » Cleveland Browns » The worst draft party, the no-goalposts tryout and how Phil Dawson came to the Browns – Terry Pluto 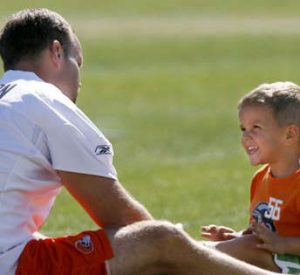 CLEVELAND, Ohio – The NFL draft is coming. It’s a huge day for your family, for your friends and you. So you rent out your favorite place to eat and invite them all to join you for what should be a life-changing day.

© DAVID I. ANDERSEN/The Plain Dealer
Here is Phil Dawson with his son Beau in 2006. Beau now plays high school football for his dad at Lipscomb Academy in Nashville.


That’s what Phil Dawson did on draft day, 1988. Dawson was a record-setting kicker at the University of Texas, a two-time All-American.

“I had petitioned the NFL after my junior year to see what kind of interested there’d be if I turned pro,” said Dawson. “They said I’d be a middle-round pick. I decided to go back to Texas for my senior year and had a good season.”

Dawson said some NFL people said he could go as high as the second or third round.

“We rented my favorite barbeque joint in my home town of Dallas,” said Dawson. “Back then, the first three rounds were on the first day. I didn’t get picked. I thanked everyone, and said to stay tuned for tomorrow – that was when the rest of the rounds took place.”


This time, the Dawson family invited people to their house. They had ESPN and Mel Kiper Jr. on the television. Day Two of the draft opened with the fourth round.

© DAVID I. ANDERSEN/THE PLAIN DEALER
Phil Dawson was cut by three teams before he finally made the Browns in 1999.


“We were sitting around, waiting for the phone to ring,” said Dawson. “It never did.”

WATCHING EVERY PICK FOR SEVEN ROUNDS

“I watched every pick,” he said. “I was glued to the coverage. We had penciled in some teams we thought needed a kicker. When they got on the clock, we got excited. But once again, it wasn’t me.”

Not only that, no kicker or punter was picked in the 1998 draft.

© Chuck Crow Chuck Crow/The Plain Dealer
Phil Dawson was an All-American kicker heading into the 1998 draft. He wasn’t picked. Nor was any other college kicker selected.


“Those were the longest two days of my life,” he said. “I had a big pro day. Lots of teams came. I went to the Senior Bowl. I kicked well. I had no indication the tide had turned against drafting me.”

Late in the draft, Dawson received calls from a few teams asking him to try out as an undrafted free agent.

“I was just shocked,” said Dawson.

Dawson believes he was impacted because in 1997, the Packers selected kicker Brett Conway in the third round. He was cut during his rookie season.

“After the draft, I was rattled,” said Dawson. “I mean, it really rattled me. You’re told your whole life to just handle your business and things will take care of themselves. I felt I did that. This was the first time in my life that statement was challenged.”

After the draft, several teams did call Dawson to try out.

He went to the old Three Rivers Stadium in Pittsburgh. It was spring time.

“There were no goal posts,” said Dawson. “It was baseball season. Bill Cowher was the coach. He took me to the outfield and told me to aim in a certain direction. I was kicking with no uprights.”

“I found myself feeling a little intimidated,” said Dawson. “There was some doubt. Maybe I wasn’t as good as I thought I was.”

He tried out for Oakland.

“The Raiders had the worst kicking performance in the NFL in 1997,” said Dawson. “I made it through the minicamps. Once veteran camp started, it was clear I wasn’t a good fit there. I asked for my release after the second preseason game and they were more than happy to grant it.”


A NEW TEAM IN CLEVELAND

“The Patriots claimed me on waivers,” said Dawson. “I spent the entire season there on the practice squad. Adam Vinatieri was the kicker, and he was great with me. I learned so much from him. New England is where I first learned how to kick and handle the cold weather.”

Dawson said he can now see how that 1998 season practicing with the Patriots prepared him for Cleveland.

“The Browns were an expansion team,” said Dawson. “Vinatieri was a free agent. He was ready to go to Cleveland and sign. But at the last minute, he changed his mind and stayed in New England.”

Then the Browns called Dawson.

“I went to Cleveland, Washington and Pittsburgh (outfield tryout) three days in a row to kick,” said Dawson. “I admit, I still hadn’t gotten over not being drafted…and being cut. But I chose to make that motivation.”

Dawson said the Browns and Washington both offered him a contract. But the Browns “had a true opening because they were an expansion team.”

“WE’LL START WITH YOU”

When Dawson arrived at the first training camp for the new Browns in 1999, he was one of three kickers.

Remember, he had already been ignored in the draft, then let go by Oakland, Pittsburgh and New England.

“I was never cut in high school or college,” said Dawson. “I never had been rattled before this experience. I never had fear of missing a kick. Never struggled with confidence. Coming to the NFL was a foreign experience to me.”

Dawson’s first competition were kickers Danny Kight and Jose Cortez. He outlasted them.

“But right at the end of training camp, they brought in Chris Boniol,” said Dawson. “He had been a long-time kicker with Dallas and the Eagles. Bringing in a veteran so late worried me.”

One day, Dawson saw Boniol packing up his stuff and leaving the locker room.

“I kept thinking this was my moment,” he said. “I’ve been waiting for someone in the NFL to tell me, ‘You’re our guy.’ “

Dawson saw Browns expansion head coach Chris Palmer walking down the hallway one way as he was heading the other.

Palmer stopped for a few seconds then said, “Well, we’re going to start with you.”

Then Palmer walked away.

“That kind of reinforced all the uncertainty I was feeling,” Dawson said. “I was thinking, ‘I’m one missed kick or one bad game away from losing my job.”

Dawson paused for a moment.

“For my next 21 years in the NFL, I don’t think I ever got over that mentality completely,” he said. “I remember that first year worrying if I’d have a job the next day. My wife (Shannon) deserves a medal for putting up with me.”

DICK GODDARD IN AN ORANGE HELMET

In his rookie season with the Browns, Dawson connected on his first field goal attempt – a 41-yarder. He also drilled a 39-yarder as time expired giving those expansion Browns a 16-15 victory in Pittsburgh – where he finally was able to kick with the goal posts in place.

He also scored the first rushing TD in the history of the new franchise, a 4-yard scamper on a fake field goal.

“I had to figure out how to kick in Cleveland with the wind and the cold,” he said. “Back then, there were only 30 jobs not just in the NFL – but 30 kicking jobs like this in the world. You couldn’t be picky.”

So he studied wind and weather patterns. He used to go to FirstEnergy Stadium during the week to practice kicking, “but I stopped after a few years. The weather on Wednesday was not the same as Sunday. It was always changing.”

Dawson was like legendary Cleveland weatherman Dick Goddard in an orange helmet.

For the next 14 years, Dawson kicked as well (better from a statistical measure) as anyone ever to wear an orange helmet. He should be mentioned in the same sentence with Lou Groza, the Godfather of Cleveland kickers.

Dawson said Cleveland had “some great ones” along with Groza. There was Matt Stover, Matt Bahr and Don Cockroft.

“The fans embraced me,” said Dawson. “They made me better. When I came on the field to kick, I felt them. They gave me confidence.”

It was former Browns CEO Joe Banner who decided not to re-sign Dawson after the 2012 season despite the kicker being perfect on 29 extra points and converting 29-of-31 field goals. He was 7-for-7 from 50 or more yards.

It was a salary cap move in the mind of Banner. Dawson kicked for six more seasons, four with San Francisco and two in Arizona. He signed a one-day contract in 2019 with Cleveland so he could retire as a Brown.

Dawson is now an assistant football coach at Lipscomb Academy in Nashville. The head coach is former Browns QB Trent Dilfer. Dawson loves working with high school kids, and likes the Christian-school setting. His son Beau is on the football team. He will be a senior in the fall and plays H-back and long-snapper.

“I loved everything about Cleveland,” he said. “The fans. The team. I’ll never forget and treasure it always.”

This is one of a series of stories about former Browns players and their draft experiences.

Rejected by his college coach, Greg Pruitt hid on a golf course on draft day

Thanks to Vince Lombardi, Ernie Green became a Cleveland Brown

Riding out a tornado and power failure, Aaron Shea was in the basement on draft day