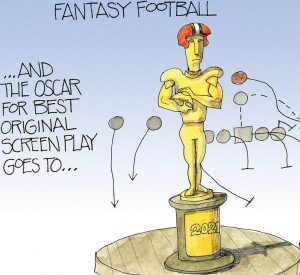 CLEVELAND, Ohio — Tonight is the 93rd presentation of the Academy Awards which sort of overlaps with Thursday’s start of the NFL Draft. So employing a little fantasy to Cleveland Browns football, what Oscar might the Browns win?

The category that leaps to mind immediately is Best Original Screenplay or Screen Play. In this fantasy world, the Browns could win the category no matter how it was worded.

As a screenplay, the Browns 2020 story of going 11-5 in the regular season and then throttling the Pittsburgh Steelers in the first round of the playoffs for the first time since 1994 was certainly a winner, especially considering the sidebar stories of COVID-19 and Kevin Stefanski being a rookie coach.

As a screen play, the Browns could win this fantasy category for Nick Chubb scoring his first postseason touchdown by taking a screen pass 40 yards in the wild card game against the Steelers.

Not bad for a team that imploded the year before under the leadership of Freddie Kitchens.

Crowquill, by artist Ted Crow, appears Wednesdays and Sundays in The Plain Dealer and on cleveland.com.