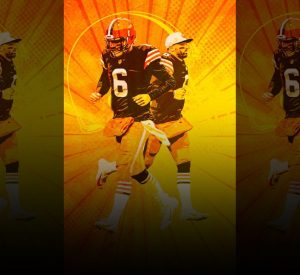 The Cleveland Browns exercised quarterback Baker Mayfield‘s fifth-year option, locking him up with the franchise through 2022.

In the new collective bargaining agreement enacted last year, fifth-year options on first-round picks are fully guaranteed. Mayfield, the No. 1 overall selection in 2018, will earn $18.858 million in salary in 2022.

So what does this move mean for the signal-caller and the Browns? And will the club commit to the quarterback long-term?

Emmanuel Acho believes the option spells good news for the future relationship between the quarterback and the franchise, as it shows that Cleveland recognizes Baker’s value.

It has been a rocky road in Cleveland for Mayfield. In his three-year career, he has worked with four head coaches. Even so, he produced two strong seasons as a starter: his rookie campaign and last season.

After a disappointing 2019, Mayfield bounced back in a major way under new head coach Kevin Stefanski. He tossed 26 touchdowns with eight interceptions in 2020, guiding the Browns to an 11-5 record and the team’s first postseason appearance since 2002.

To top it off, Mayfield led the Browns to their first playoff victory in 26 years, knocking off the rival Steelers and snapping a 17-game losing streak in Pittsburgh in the process.

Mayfield now boasts the most passing yards (11,115) and passing touchdowns (75) by a Cleveland quarterback through his first three NFL seasons.

However, Marcellus Wiley is not so sure the Browns are all-in on Mayfield, believing that the signal-caller still needs to convince Cleveland’s front office that he’s the guy.

“I’ve always said pick up his fifth-year option,” Wiley said. “Why? It’s cheap money. … $18 million puts him right in a prove-it position. What is $18 million in the NFL? That is either a fringe starter or a backup player … so fans out there, don’t get your hopes up too much because you might get what you’re paying for.”

Most of the other quarterbacks in the league making similar salaries – including the Carolina Panthers’ Teddy Bridgewater and the New Orleans Saints’ Taysom Hill — are either in backup roles or fighting for their starting spots.

After a 2020 campaign in which Bridgewater led the Panthers to a 4-11 record in 15 starts, posting 3,733 passing yards, 15 passing touchdowns and 11 interceptions, Carolina traded draft capital for New York Jets quarterback Sam Darnold.

In a similar spot, Hill will earn a total of $12.159 million ($1,034,000 in base salary and a signing bonus of $11,125,000) as he heads into a quarterback competition, looking to win the starting role over Jameis Winston after leading the Saints to a 3-1 record in four starts last season.

Mayfield is certainly on more solid ground than those two, as he is clearly the starter in Cleveland.

But given that he is making prove-it money while playing on his option, it’s safe to say that the Browns’ QB still has work to do in 2021.

For more up-to-date news on all things Browns, click here to register for alerts on the FOX Sports app!

Get more from National Football League Add to your favorites to get information about games, news and more.