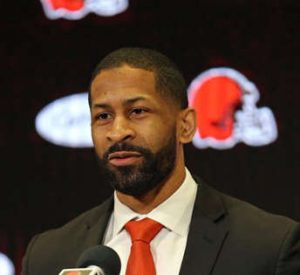 CLEVELAND, Ohio — In this week’s edition of Hey, Mary Kay!, I answer questions about the NFL Draft, Denzel Ward’s fifth-year option, and more.


Hey Mary Kay: I know it seems pretty obvious that Browns GM Andrew Berry will draft defense in the first round. I think he’s actually going to trade up if a receiver he likes drops to the late teens. Can you see a scenario where Berry goes wide receiver in the first round? #clevelandbrownsforever — Jeff Lerner, Avon, Ohio

Hey, Jeff: I absolutely do see a scenario in which the Browns draft a receiver in the first round. If a receiver the Browns have rated very highly is within reach, they wouldn’t hesitate to draft him. The thing to remember about Andrew Berry is that he’s not locked into a particular position and he won’t draft for need. He abides by the golden rule of drafting: select the most dominant player at the most premium position when you’re up and keep adding the best players possible to the team.

He won’t get caught up in trying to plugs holes, because that’s the quickest way to end up with too many players considered “just a guy.’’ You can fill needs through free agency, the waiver wire and trades. The draft is about selecting great prospects with tremendous upside and developing them into quality starters. Two excellent receivers who could be available near the Browns No. 26 are Minnesota’s Rashod Bateman and Ole Miss’ Elijah Moore. I still think they’ll probably go defense in the first round, but Berry won’t be painted into that corner.

Hey, Mary Kay: The Browns picked up the fifth-year option on Denzel Ward, which is great as he’s an elite talent and the Browns are better when he is on the field. The problem is that in each of his first three seasons, he’s only played in 12 games each year. If Ward misses a quarter of the season for a fourth straight year, will the Browns hold his unavailability against him in terms of negotiating a long-term deal? Can they put injury/playing time incentives in the contract? Would Ward even agree to such incentives? — Thanks, Joe Fraterna, South Bend, Indiana

Hey, Joe: I don’t believe the Browns will hold Ward’s three or four missed games a year against him in terms of negotiating the extension. He’s a premier, lockdown cornerback, and those are hard to find. I think they expect him to miss those three or four games, and that they’ll still be willing to pay him his market value, which is currently about $18 million a year. I don’t think it can hurt to build some play-time incentives into the deal, and I think Ward would embrace the chance to make more money. The Browns did that with Jadeveon Clowney, adding $1 million in play-time incentives to his $8 million contract, as well another $1 million for sacks.

Hey, Mary Kay: I can’t see the Browns drafting anything but linebacker in the first round. Do you think trading up for Micah Parsons is worth it if he falls past 15, or are the off field issues too troublesome? Also do you see Andrew Billings contributing to the front seven after he opted out last season and the departure of Sheldon Richardson. — Steven Wolford, Newton Falls, Ohio

Hey, Steven: Penn State’s Parsons is obviously a tremendous talent, and some believe he’ll go in the top 10, possibly to the Lions at No. 9. If he happens to fall past 15, the Browns would certainly have to consider him, but they also place a premium on character and would definitely think twice. Some teams are bigger on ‘green sticker’ guys than others, and I believe the Browns are one of those teams. They’re stocking the locker room with tough, smart, accountable players who exhibit excellent leadership skills and a genuine love for the game.

If they’ve determined that Parsons’ indiscretions were due to immaturity, perhaps he’s still rated highly on their board. But I know that they’ve kept talented players off their board for off-field red flags in the past. As for Andrew Billings, signed as a free agent last year from the Bengals, the Browns are counting on him being a key part of the tackle rotation this season along with Malik Jackson, Jordan Elliott, and possibly a draft pick.

Hey, Mary Kay: What about the Cleveland Browns for the No. 26 in the 1st Round in the NFL Draft? — Ruth Smith, Fairview Park, Ohio

Hey, Ruth: It all depends on how the draft falls, and it’s an especially difficult year to predict, because so many players opted out because of COVID-19. The Browns are well-positioned in the draft to select the best available player at No. 26, or to make a trade and pick somewhere else. If they stay at No. 26, they could have a couple of edge rushers available in Georgia’s Azeez Ojulari and Tulsa’s Zaven Collins, a couple of cornerbacks in Virginia Tech’s Caleb Farley and Northwestern’s Greg Newsome, and a few good receivers in Minnesota’s Rashod Bateman and Ole Miss’ Elijah Moore. They have the luxury of picking whatever position they want with few holes on the roster.

Hi, Mary Kay: I was wondering, do the Browns have a “type” they are looking for in the draft? Smart, big, fast, hungry…. ? — Jason Lyons, Akron, Ohio

Hey, Jason: Their three prerequisites are ‘tough, smart, and accountable.’ Beyond that, they’re looking to add speed to both sides of the ball, so I think that will be a theme. They look for athletic linemen who can pull and move. They look for linebackers who can play all three spots and defensive lineman who can rush from inside and out. They look for running backs who can catch and receivers who can block and run. The more you can do, the more valuable you are to this front office and coaching staff.

Hey, Mary Kay: How realistic do you see us drafting a wide receiver in the first round? Do you think it can happen? Like on a scale of 1-10 with 10 being “it can absolutely happen and might just happen” — Jonathan Torres

Hey, Jonathan: I would give it a six in terms of it being likely to happen. I still think they’ll probably go defense in the first round, but I wouldn’t be shocked if they draft a receiver. They have to begin planning for life after Odell Beckham Jr. and Jarvis Landry, and there would be no shame in drafting one of these premier wideouts high and giving them time to develop. Even though they have a surplus at the position, if there’s a Pro Bowler in the class, they shouldn’t hesitate.

Hey, Mary Kay: What round do you see the Browns taking a linebacker? I’ve seen mock drafts that have the Browns taking JOK [Notre Dame’s Jeremiah Owusi-Koramoah] in the first, all the way to Justin Hilliard in the 4th. I know they already signed Anthony Walker, so I’m interested in your opinion about it. — Ben Friedman, Canyon Lake, Texas.

Hey, Ben: If they take a linebacker in the first round, I believe it will more of a hybrid player like JOK who can flourish in today’s game by covering tight ends over the middle and running backs out of the backfield. JOK has a rare blend of speed, agility and explosiveness that sets him apart from a regular linebacker. He’s only 6-1, 215, but that’s adequate for a coverage ‘backer in the NFL. I think Berry would draft a linebacker in the first round like JOK who can run the passer and also make tackles behind the line.

He won the Butkus Award last season as the nation’s best linebacker, and has the versatility to excel in this scheme. The signing of Anthony Walker wouldn’t preclude the drafting of a JOK. But I could also see the Brown drafting a linebacker in the second or third round and opting for a more premium position in the first round such as cornerback or edge.

Hey, Mary Kay: As a huge Browns fan I will be traveling to the Draft. Does it being held in Cleveland hold any bearing at all on what they might do? I completely understand the logic of trading back. I love being smart as Andrew Berry is! Yet, at the same time the draft may never be in Cleveland again. This is one time I’d love to see us be a little flashy and would definitely hate us walking away without a player on the first night of a Cleveland-held Draft! — Derek Heminger, Marysville, Ohio

Hey, Derek: It all depends on how many first-round grades the Browns have in this class, and if there are some of those players left as they approach No. 26. I’m guessing there’s a wide disparity in grades this year because of so many players opting out or playing partial seasons. The Browns also have enough ammunition to move up some in the first round to grab one of the better players. The fact that the draft is in Cleveland will have no bearing on Andrew Berry’s first-round strategy. I’m guessing they will make a pick in the first round, in part to secure the fifth-year option exclusive to that round.

Hey, Mary Kay: What backup offensive linemen are on the roster? There were a few asked to fill in during the end of the season and the playoffs that performed well. — William Tyminski, Medina, Ohio

Hey, William: There are actually a dozen backup offensive linemen on the roster, including Chris Hubbard, Michael Dunn and Blake Hance, whom Baker Mayfield met in the locker room for the first time before the wild card playoff game in Pittsburgh. A couple of recent draft picks are on the list, including center Nick Harris and guard Drew Forbes. The Browns will have plenty of competition for the backup spots in camp, and will likely add some drafted and/or undrafted rookies.