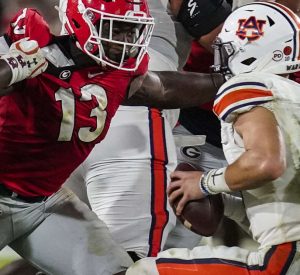 The Cleveland Browns hold the No. 26 overall pick in the 2021 NFL draft, and Dawg Pound fans everywhere want to know who will be available when the team picks. The current draft odds offer a hint at the players expected to come off the board right around where Cleveland picks at 26.

BetMGM freshly updated the draft slot over/under props for several players in the Browns draft range. It’s a collection of many names familiar to Browns fans who follow mock drafts, with a few regular fixtures prominently featured within striking distance of No. 26.

Three players have an over/under slot of 26.5, which means bettors are deciding if the Browns would draft the player or pass on him if given the choice. The trio:

Gannett may earn revenue from audience referrals to betting services. Newsrooms are independent of this relationship, and there is no influence on news coverage.

Is it time for the Ravens to let Lamar Jackson ‘graduate’?

Cleveland GM Andrew Berry: Browns not focused on ‘instant gratification’ in the draft