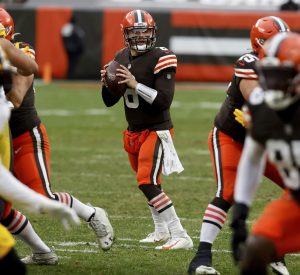 The Cleveland Browns entered a different stratosphere with last season’s run to the playoffs and near-upset of the then-defending Super Bowl champion Kansas City Chiefs.

Still, the once-embattled franchise should be considered a legitimate title contender. And to maximize its burgeoning championship window, Cleveland has to lock up its core.

On Friday, the Browns exercised the fifth-year options for quarterback Baker Mayfield and cornerback Denzel Ward, whom the team selected first and fourth, respectively, in the 2018 class.

“Both of those players have really done a nice job for us over the first three years,” Cleveland general manager Andrew Berry told reporters while confirming the news. “We view both of those guys as young players who continue to ascend.”

That view points to why Cleveland should get extensions done soon for the pair. The longer the team waits, the more expensive both are likely to become.

In April 2020, the Browns picked up defensive end and perennial NFL Defensive Player of the Year candidate Myles Garrett’s fifth-year option. Three months later, they signed the 2017 No. 1 overall pick to a five-year, $125 million extension.

According to Cleveland.com’s Mary Kay Cabot, Berry has yet to begin extension conversations with Mayfield and Ward. But the team’s handling of Garrett provides a possible timetable.

Eight months ago (and even well into the 2020 campaign), many wouldn’t have thought the duo was deserving of retention.

Every time Mayfield’s name came up, questions arose about his ability to be the team’s franchise quarterback. To be fair to his detractors, his performance through the first two seasons was inconsistent at best.

Mayfield set the then-rookie record in 2018 with 27 touchdown passes and nearly became the Offensive Rookie of the Year. He regressed in his second season, though an untenable situation that resulted in Freddie Kitchens’ dismissal after only one year as head coach certainly played a role in the quarterback’s downturn.

The 26-year-old is clearly trending in the right direction and should only improve with a full offseason of Stefanski in charge, no turnover in the coaching staff and a second year in the same offensive scheme.

Cabot added a “general sense of satisfaction” exists between player and organization.

“From what I understand, he has answered all questions for them as an organization,” NFL Network’s Ian Rapoport reported in January. “They do believe he is their franchise quarterback. And it’s not just what he’s done on the field. It’s also off the field—the maturity that he’s shown, and the Browns are clearly all-in on this guy based on what he has done this year.”

That paves the way for an extension when it makes the most financial sense. Sure, the Los Angeles Rams’ and Philadelphia Eagles’ decisions to extend Jared Goff and Carson Wentz didn’t end well for either franchise and could serve as cautionary tales. Conversely, the Dallas Cowboys waited, and Dak Prescott maximized his leverage to garner the most guaranteed money at signing in NFL history ($126 million).

Mayfield’s situation likely falls somewhere between those points—which is why an extension in the next few months is so important.

The NFL’s salary cap is set at $182.5 million after last season’s $198.2 million. Quarterbacks’ salary-cap charges tend to be linked to those numbers. As expected cap increases hit in the coming years because of recent television contract agreements, the promise of Mayfield’s improvement also bumps up his value.

The Dawgland’s Jack Duffin projected a four-year, $136 million extension for Mayfield, which would make him the NFL’s fifth-highest-paid quarterback in average annual salary. But that number could grow.

“The $136m/4 deal is working off the 2020 salary cap and Baker costing 17.15 percent at the time of signing. If he plays better than that, the number could rise to 18.6 percent where [Russell] Wilson is or 19.7 percent where [Deshaun] Watson is,” Duffin explained.

Obviously, a higher percentage wrapped up in a quarterback creates less room for everyone else. Also, non-movement on this front now could cost the team significantly more in the long run if Mayfield continues to build on last season’s second-half performance. Realistically, an early signing could save the team tens of millions of dollars.

For Ward, the situation differs slightly. The cornerback market is a tad more rigid. It’s more in line with the Garrett situation since it’s about signing him now before the positional market escalates over the next few years.

When Garrett signed his deal, it included the highest average annual salary and practical guarantees ever for a defender. Less than two weeks later, Joey Bosa signed an extension with the Los Angeles Chargers that surpassed both numbers.

Ward turns 24 this week. He’s already been named to one Pro Bowl. And he’s one of the league’s best cover corners. As long as he stays healthy—which is a concern since he’s never played a full 16-game slate—he’ll enter the ranks of the league’s highest-paid cornerbacks.

The Rams’ Jalen Ramsey and Baltimore Ravens’ Marlon Humphrey have deals at or exceeding $19.5 million annually. Ward’s extension might not quite reach that number, but it won’t be too far behind the top of the market, especially considering the other cornerbacks in need of new deals.

Stephon Gilmore, Marshon Lattimore, Kyle Fuller and J.C. Jackson are scheduled to be free agents after the upcoming season. Tyrann Mathieu can be thrown into the mix as well as an elite playmaker and nickel defender. Like Ward, 2018 classmate Jaire Alexander entered the initial window for a contract extension this offseason, and the Green Bay Packers defensive back is arguably the league’s best cover man.

The cornerback market will almost certainly reset based on the availability of the aforementioned names. It’s far better and more affordable to be early than late.

The upcoming balloon payments for the Browns are a product of finally drafting well and developing players. Difficult decisions are coming, since PFF graded Cleveland as having the league’s second-most talented roster entering this year’s draft. The team will have to prioritize.

The Browns are already in the red regarding the projected $192.5 million 2022 salary cap. Eventually, Cleveland will have less than $20 million in available space once it signs this year’s rookie class and the expected rollover cap is applied, even with the projected $10 million increase to this year’s number. The front office can rework certain deals or move on from highly paid individuals, of course. But those are discussions for another day once the team is forced to have them.

How the Browns approach long-term extensions with their top stars now could determine if and how they structure potential contracts with others.

Garrett, Mayfield, Ward and left tackle Jedrick Wills Jr., who’s only 21 after being the 10th pick in last year’s draft, are organizational tentpoles. Each plays a premium position and would hold significant value if they were to ever hit the open market. There’s every reason for the Browns to extend them as soon as possible and have the framework in place for years since the franchise is finally building toward leaguewide significance.