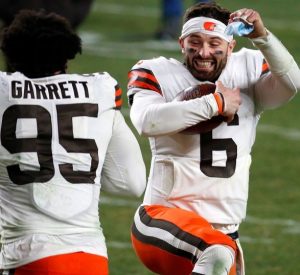 The San Francisco 49ers already moved up to No. 3 overall in this week’s NFL Draft, and it feels like there will be quite a few major trades to come both leading up to the draft and during it. Since the top 10 is loaded with elite prospects, there should be plenty of teams that are looking to give up significant assets to move up even if it’s just a few spots.

Over the years, the New England Patriots have been known for trading back and collecting extra draft assets. The Cleveland Browns will probably be a team that does that a fair amount under general manager Andrew Berry, who brings an analytics-heavy approach to the front office. Typically, the numbers show that on average trading down provides more value as desperate teams overpay.

Berry addressed the possibility of trading out of the No. 26 overall pick during a press conference last week, and he did not rule it out whatsoever.

“In general, how I view the draft is we really go into the mindset of really trying to maximize the long-term impact on our roster,” Berry said, via ProFootballTalk’s Mike Florio. “It is less about filling a need or some level of instant gratification on the roster and more about a longer-term focus on the team. That all being said, I like where we are picking, and not just at 26, but at 59, 89, 91, 110 and so forth.

“There are plenty of opportunities where we can add young players who can grow with us over the next several years. To your question about moving off of the pick, I think the positioning in this draft allows us to be very flexible, whether that is moving up, down or sitting and picking. Largely, that will be dictated by how the board falls ahead of us. I think we have a lot of flexibility going into Thursday night.”

With a pretty young roster, Cleveland could go a number of different directions in the first round if it stays at No. 26. Certainly if a surprising prospect drops to Cleveland, the Browns could go with the “best player available” strategy. Berry reiterated that the Browns’ front office will keep its options open.

Get the fastest scores, stats, news, LIVE videos, and more. CLICK HERE to download the CBS Sports Mobile App and get the latest on your team today.