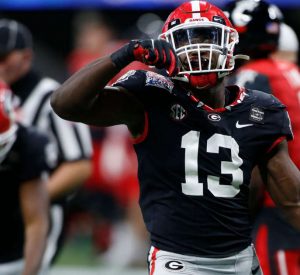 It’s a different feeling in Cleveland this year, as the Browns sit with the No. 26 overall pick after having had their first playoff season since 2002. Most of the team’s success in 2020 was highlighted by the play of the offense, which is stacked from top to bottom. The team has five above average offensive linemen, two running backs who can play at an All-Pro caliber, three tight ends they have significant investments in, two former Pro Bowl receivers, and a franchise quarterback. Unless the team wants to consider upgrading their No. 3 receiver, there is no way that GM Andrew Berry selects a player on the offensive side of the ball in the first round.

Defense will assuredly be the route that Cleveland goes with in the first round, and they could really go in any direction: Defensive line, linebacker, cornerback, and safety could all use further upgrades. The team took steps in free agency to address the secondary by signing two free agents: safety John Johnson and cornerback Troy Hill. Last year’s second-round pick, safety Grant Delpit, hopes to play in 2021 after missing his entire rookie season with a torn Achilles. Greedy Williams also missed all of last season with a shoulder injury and is expected to return at cornerback.

Having four “new” players factored into the secondary already should steer Berry to look at the front seven during the draft. Cleveland signed defensive end Jadeveon Clowney to a 1-year, $8 million deal to complement defensive end Myles Garrett, but that represents a short-term solution. Cleveland needs to think about sustaining their pass rush opposite Garrett for the long-term, and it just so happens that the top edge rusher in this year’s class is still available with this pick: Azeez Ojulari out of Georgia.

Azeez Ojulari and His Fit for the Browns

Last year, Ojulari led the SEC in sacks, tackles for losses, and forced fumbles. Pro Football Focus graded him with a 91.7 in 2020, which was highest among college edge rushers. PFF also credited him for being the edge rusher who used his hands better than anyone else in his class, as demonstrated in this three-clip highlight:

At 6’2, 249 pounds, he is a bit undersized for your prototypical edge rusher. While his get-off speed is impressive, it could also be used against him unless he adds some more versatility to his repertoire. Mobile quarterbacks might be prone to taking off or stepping up if they know he is only a threat to rush up the field. The advantage that Cleveland has in developing Ojulari, though, is that tandem of Garrett and Clowney.

Cleveland let go of both of their starting defensive tackles from a year ago. Instead, they signed Malik Jackson to a one-year deal, and also hope to get some production out of Andrew Billings. However, there is also some thought that Clowney could see some reps on the inside – and that is something that Garrett has done at times too. Having the flexibility to move those guys around will already force opposing teams’ offensive lines to choose who they are going to double team. And if all their attention is focused on Garrett and Clowney, that is where the team could thrive off of having Ojulari’s speed, almost allowing him to become a free rusher to wreak havoc on opposing quarterbacks.

Dane Brugler of The Athletic projects Ojulari to be “a younger version of Yannick Ngakoue” and labels him an “instinctive and explosive athlete with the dip-and-rip cornering skills and scheme versatility to become an impact NFL pass rusher.”

If Ojulari isn’t available, I still think there is a high probability that the team looks to select another edge rusher, with alternative needs being a defensive tackle or linebacker.