Home » Cleveland Browns » Forgetting about immediate impact is how the Browns can win the 2021 NFL Draft: Scott Patsko 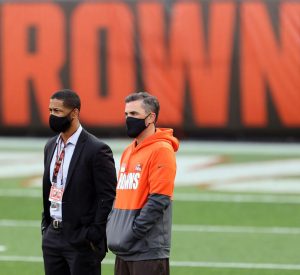 CLEVELAND, Ohio – Free agency is for need. The draft is for value.

“In general, how I view the draft is we really go into the mindset of really trying to maximize the long-term impact on our roster,” Berry said. “It is less about filling a need or some level of instant gratification on the roster and more about a longer-term focus on the team.”

And also, this: “If you are going into the draft looking for maybe a cure-all player, I think that is a little bit misguided, largely because it does take players a little bit of time to get their sea legs in the NFL.”

So, as I join my fellow Browns writers in our series on how the Browns can win the draft, know that I’m thinking about the future, and not the impact these players will have on 2021.

This could be Greg Newsome II of Northwestern. It really doesn’t matter. Just take the cornerback you like the best here. The NFL is a passing league and that adds value to drafting a cornerback in the first round.

And in the case of the Browns, there’s also an underlying need at this position, too. And as Berry noted last week, “Certainly, it is always nice when a particular need aligns with your draft slot.”

Greedy Williams is trying to return after missing the entire 2020 season and Terrance Mitchell is now with the Texans. After the Denzel Ward and Troy Hill, the depth chart is thin on experience.

Draft Samuel and then hope he only needs to play 300 snaps as a rookie.

After quarterbacks, no position has a greater impact on NFL scoring than wide receivers. Receivers are also paid for that impact, with the average per year of the top 10 salaries ranking third behind quarterbacks and edge rushers.

Getting a talented receiver who can step into a major role in a year or two while still on a rookie deal is the kind of value every GM wants.

Again, just like with cornerback, the specific player doesn’t matter so much. Targeting the passing game with the first two picks in the draft, though, does matter.

Two picks down and you have one person to defend the pass and another to weaponize it.

Jadeveon Clowney and Takk McKinley are on one-year deals. I went with Sample here because of his ability in both pass rush (90.4 PFF grade) and against the run (84.0 PFF grade). He was also versatile at Tulane, playing both inside and outside along the defensive line.

That seems to fit the mold of the line the Browns have assembled for 2021. And if you hit on this pick you get to shed Clowney and/or McKinley for a low-salary player at a high-salary position in 2022.

Yes, the Browns signed John Johnson III, expect Grant Delpit to return and still have Ronnie Harrison. But, as Berry pointed out last week, “Bill Polian used to always say, ‘Your needs today are not the same as your needs tomorrow.’ I have definitely found that to be true throughout my football career. Again, we really do not go into the mindset of ‘Hey, we have to fill a certain position or a certain position at this pick.’ It really is about maximizing long-term impact on the roster.”

Defending the pass is always going to be high on my list of needs for an NFL roster. The league set all-time records for scoring and passing offense in 2020, and things have been trending that way for some time now.

The Browns value tight ends more than most. They used three of them on the field together more than any other team last season. Tremble isn’t the same as the tight ends already on the roster. He’s a blocker first, grading at 83.7 in run blocking at Notre Dame.

More than that, though, he could double as a fullback in Kevin Stefansk’s offense, providing a more versatile weapon than Andy Janovich proved to be in 2020.

It doesn’t need to be Hilliard. but a linebacker who has shown ability in coverage, such as Hilliard, is the kind of linebacker the Browns should be targeting. At this point, the main coverage linebacker for the Browns is Malcolm Smith, and he turns 32 in July. Mack Wilson, another linebacker with coverage ability, has been inconsistent in his two seasons.

Mitchell is fast (4.38 40-yard dash) and is heavy on explosiveness, elusiveness and yards after contact. Those last three characteristics are what make Nick Chubb and Kareem Hunt two of the best running backs in the NFL.

Mitchell might fit the mold of what Stefanski wants in the backfield more than D’Ernest Johnson.

I’m with the folks who don’t think the Browns need to draft nine players this year. Unless Berry wants to load up with a couple more defensive backs to fill out the practice squad, it makes more sense to use these final two picks as assets for future drafts.