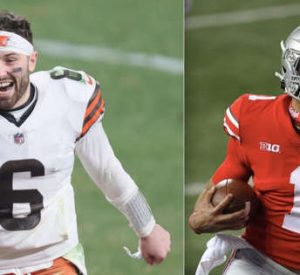 CLEVELAND — Justin Fields has the support of one of Ohio’s other star quarterbacks.


Browns quarterback Baker Mayfield recorded a video promo for NFL Draft coverage on NFL Network and ESPN-affiliated networks. In it he speaks directly to Fields, the Ohio State quarterback whose consensus draft status has dipped in recent weeks.

“Sometimes things don’t play out the way you planned it,” Mayfield said. “But so what? When things didn’t work out, you found your own path. It seems like you always find a way, and that’s what’s going to allow you to put you own stamp on the league.

• How Justin Fields created an Ohio State legacy, and why it will follow him into the NFL

This is the same Mayfield who once planted an Oklahoma flag at midfield at Ohio Stadium after he led the Sooners to victory.

Both Mayfield and Fields took indirect paths to their eventual college stardom.

Mayfield was the Big 12′s Freshman Offensive Player of the Year in 2013 before transferring to Oklahoma. He won the Heisman Trophy there, and the Browns made him the No. 1 overall pick in the 2017 draft.

Fields began his career at Georgia but also transferred to Ohio State after one season. He was a Heisman Trophy finalist in 2019 and led back-to-back playoff berths.

Prior to the 2020 season there was some debate whether Fields could be the first quarterback selected. Instead, some now have him ranked behind Clemson’s Trevor Lawrence, BYU’s Zach Wilson, North Dakota State’s Trey Lance and Alabama’s Mac Jones.

How will the Ohio State Buckeyes replace Dasan McCullough in their 2022 recruiting class after his flip? Buckeye Talk Emergency Podcast