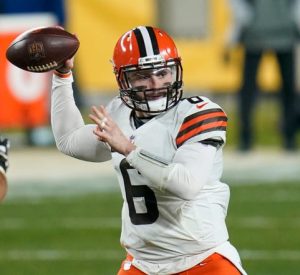 Browns quarterback Baker Mayfield believes the truth is out there.

Check that. He knows the truth is out there.

Mayfield’s early March sighting of an unidentified flying object provided comedic fodder for everyone from Tampa Buccaneers quarterback Tom Brady to his media nemesis, Fox Sports Radio Host Colin Cowherd. However, during a Zoom call with the Cleveland media Monday, Mayfield stuck to his guns.

“I’m a firm believer in UFOs and Sasquatch. It’s real. I saw it,” he said. “I’m glad the Navy finally confirmed some more pictures. Now everybody doesn’t think I’m as crazy. I believe.”

Mayfield said the unexplained incident happened while he and his wife Emily were driving home from dinner in Austin, Texas. Mayfield said Emily was looking at her phone at the time.

“It was bright enough to where it caught her attention, too,” Mayfield said. “We kind of just looked at each other, ‘Did you just see that? Yeah.’ Other people in that area confirmed, too.”

Mayfield dismissed the story line surrounding him and wide receiver Odell Beckham Jr. and their alleged inability to establish a connection the past two seasons.

Conventional wisdom from some corners said that the Browns and Mayfield didn’t take off offensively until after Beckham tore his ACL early on against the Cincinnati Bengals on Oct. 25 during a 37-34 Browns win in Week 7. After losing to the Las Vegas Raiders the next week to end the first half of the season at 5-3, they earned a 6-2 record in the second half of the regular season, and the offense appeared to find an identity.

There was a marked difference in Mayfield’s performance, too, one that he credited to the fact the team’s bye week arrived at exactly the midpoint of the schedule, allowing the Browns to do some self-scouting with a significant sample of plays.

Mayfield began the 2020 season with 10 touchdown passes and seven interceptions in the first six-plus games. The last of those interceptions occurred in the first quarter in that game against the Bengals on a ball thrown to Beckham.

However, Mayfield threw 20 touchdown passes and just two interceptions the rest of the season, including the two playoff games.

“I would not say it’s because we’re not throwing to him,” Mayfield said of Beckham. “[If] you take one person off, you still have 10 other guys who are on the field. It’s not about that. The narrative can be what it is, but we’re looking forward to getting back to work together.”

That being the case, Mayfield said he’s aware of how Beckham’s rehab is coming and is pleased by it.

“I have talked to Odell,” Mayfield said. “He’s very happy with where he is in the rehab process. I’m happy for him. He looks good. He feels good. I’m looking forward to starting where we should.”

The Browns were the popular pick to make some noise in 2019, and they heaped a ton of expectations upon themselves. The hype and those expectations went up in bonfire-sized flames under coach Freddie Kitchens, leading to another housecleaning that brought coach Kevin Stefanski and the current staff here. The expectations return, but Mayfield said it should not be an issue.

“First, I would say just the culture, anything related to that and our whole team, it’s nowhere near what it was, and that’s a good thing. We have worked hard on setting a standard,” he said. “When it comes to expectations and things that other people on the outside want to portray or predict, it’s just that — it’s people on the outside.”

Mayfield continued: “We’ll set our own expectations, and it’s only April, so we have to work for our ultimate goals and continue to put those pieces in and build those blocks for the long-term goal.”

Like many outside of the organization, Mayfield expressed his admiration for what general manager Andrew Berry has assembled in restructuring the Browns defense. Mayfield said he reached out to many of those players who include defensive ends Jadeveon Clowney and Takk McKinley, safety John Johnson III and cornerback Troy Hill.

“Obviously, they have done a great job. It’s an exciting week for us as well. It’s draft week. As for the guys who are already on the team, we’re doing these meetings,” Mayfield said. “Everybody is working out and doing these things. It has a good feeling to it, but it’s April for a reason. We’re setting the expectations ourselves. Everybody can talk on the outside. I’m excited about the people we have bought in just culture-wise.”

Mayfield, taken No. 1 overall three years ago in the NFL draft, will enjoy this year’s event from his home in Austin, he said.  He understands, however, what it means for Cleveland to host the draft for the first time.

“It’s tremendous. Anything around the draft and the amount of people who it brings into the town and the city, that’s so good for all of the businesses that have been hit so hard because of the pandemic,” he said. “Hopefully, anybody who has gone through tough times gets a little bit of a break from people coming in to visit from out of town — obviously, doing it safely within the protocols. It’s an exciting thing for Cleveland. The whole setup from the pictures I’ve seen so far, it looks amazing. I think it’s going to be a special weekend for Clevelanders.”

Mayfield said he doesn’t have any preference as to how Berry uses the team’s first-round selection (No. 26 overall).

“Whoever we add offensively or defensively, welcome them in with open arms, like I said about everybody else we have added with free agency,” Mayfield said. “Set the standard, teach these guys the new system and roll with it.”