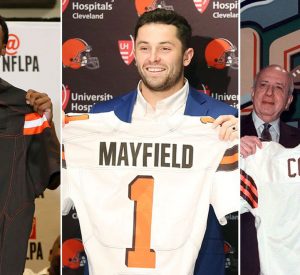 CLEVELAND, Ohio – I know people who used to hope the Browns would lose every game.

Because to them, the NFL Draft was the Super Bowl. The way for their team to even dream about the Super Bowl was to draft high and draft often.

A few years ago, I would have written something like, “Finally, there is a Super Bowl in Cleveland!”

That’s because the 2021 NFL Draft is being held in our town this week.

With the 26th pick, the Browns select…

I have no idea who they will pick with the 26th pick. The draft has been down on my list of writing priorities, and that’s rare.

The Browns were 11-5 last season. They made the playoffs. They beat Pittsburgh in the first round. They have a quarterback in Baker Mayfield.

“I’ve been watching the Browns since 1999 and never felt this apathetic about the draft,” wrote Ed Bobincheck. “That’s good because I don’t see it as how the Browns have to build a winning core…But having the draft here means a lot. I love Cleveland and this gives us a chance to show off.”

What will the Browns do with that 26th pick? I think it will be a defensive back.

This much I do know: There won’t be any Cleveland Browns choice holding up a No. 1 jersey at the postdraft press conference.

I hope the narrative around the draft being in Cleveland is no longer about a dismal franchise in a depressed city. This should be an upbeat turnaround story for the town and the team.

I’d be embarrassed to count how many times I have written, “This is the most important draft in the history of the Browns franchise.”

Know what calling a draft “monumental” or the “biggest in franchise history” means?

It means your team is in big trouble. It means you have no quarterback. It means you are deluding yourself into believing one draft can fix what has been wrong with the franchise for years.

“I used to park in front of my television all day Saturday and Sunday for the draft,” wrote Ron Koehler. “I was hoping the Browns would win the draft. I remember cheering on selections like Barkevious Mingo, Corey Coleman, Akron’s Charlie Frye, Ed King, T-Rich (Trent Richardson), Johnny Football (Johnny Manziel), Cam Erving…”

Ron listed more players, but I already have a sinus headache and the list was making it worse.

Sure enough, he left one out when I asked readers for feedback on this subject on my Facebook page.

I scrolled down and there was Gregory Shewood writing, “The disappointment started for me when we drafted Mike Junkin.”

That’s how one Browns scout described Junkin when the team made him the No. 5 pick in the 1987 draft.

Didn’t quite work out that way for the Browns linebacker.

I was very excited when the Browns made Richardson the No. 3 pick (trading up) in 2012. I was very wrong. In 2013, CEO Joe Banner shipped the running back to the Colts for a 2014 first-round pick. Banner was fired before he could make the choice – which became Johnny Manziel.

“Terrible drafting and poor decisions put this franchise behind the 8-ball for more than 20 years,” wrote Mark Potthoff. “It’s why the NFL Draft was a Browns fan’s Super Bowl. It really was. The year we drafted Justin Gilbert and Manziel almost ended it for me…but I kept watching the praying and hoping the Browns would finally get it right.”

LOST IN THE WEEDS

I love this from Shawn Palmer: “I remember watching the draft and they announced ‘With the 30th pick in the draft, the Cleveland Browns select Craig Powell, Special Teams, Ohio State.”

I don’t recall the special teams part, but he could be right.

I do remember asking former Browns coach Bill Belichick how Powell was doing as a rookie during training camp in 1995.

Belichick stared hard at me and said, “He’s lost in the weeds.”

Then Belichick looked away.

The fans are not taking a victory lap after the 2021 season.

“The draft always was the playoffs for us Cleveland fans,” wrote Jorge Ramos. “Now being on the other side feels really good.”

Or as Jim Michener wrote: “MUCH more relaxed this year.”

The 11-5 season was the best in the Browns’ sorry history since they returned in 1999.

You can argue that the 1994 Browns also were 11-5. They also won a playoff game. But they did lose to the Steelers in the second round. And then came the move.

“The Browns finally have a good GM and coach and staff and culture,” wrote Todd Lang. “We’re going in the right direction.”

That’s because the Browns have the QB issue settled with Mayfield, along with a strong offensive line.

The desperate search for a QB led to so many mistakes. Or perhaps they had a decent one in Tim Couch (1999), but not much blocking or talent around him.

“My man Couch,” wrote Joe Dailey. “Got his butt kicked year after year. A shame.”

Many fans wrote how only this week have they begun seriously trying to figure out what the Browns should do with the 26th pick. Linebacker? Defensive back? Receiver?

“Having the draft in Cleveland will give us the respect we deserve from the rest of the country,” wrote Bill Meyers. “Non-sports fans will see our city and our team as a great franchise within a great city.”

That’s so true, regardless of where the Browns draft.

Finally, Ted Rouge summed up the feelings of many Browns fans: “I’d love to be drafting 32nd (last as a Super Bowl winner) for a at least a couple of years in the next decade!”

Phil Dawson, the worst draft party and the no-goal-post tryout

The Cavs have me talking to myself, starting with a history lesson – Terry Pluto

Can you believe it, the Browns don’t need a QB? – Terry’s Talkin’ Browns

Tribe Scribbles: They haven’t hit. They’re not hitting. Can anything change?

Does cutting Sheldon Richardson make sense for the Browns?

This starts as a sports story, then goes right to the heart

Inside story of why Browns signed Jadeveon Clowney

Remember the Trevor Bauer deal, how does it look now?

Terry’s Pluto Cavs Scribbles: Hope for the future or not?