Home » Cleveland Browns » 11 NFL Draft-adjacent things to see, do and eat in Cleveland 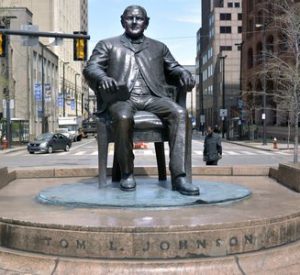 CLEVELAND, Ohio — So, you’re in Cleveland for the NFL Draft. Welcome!

Still, unless you have already secured a spot inside the Draft Theater or are lucky enough to snatch a spot just outside of it in the Vaccinated Fan Zone, chances are you’ll be watching the proceedings and accompanying musical performances on screens at the Draft Experience interactive football theme park at FirstEnergy Stadium or one of the three official Rock the Clock End Zone viewing parties downtown at Mall C, Playhouse Square or the Flats East Bank.

But what about the rest of the time? Here are 11 ways to make a quick trip to Northeast Ohio count. Because just like every NFL team this weekend, you’re on the clock.

GET TO KNOW THE CITY

If you’re new to Cleveland, one of the best ways to get acquainted with the city is to explore it on foot. Tours of Cleveland offers a two-hour walking tour that includes a brief history of the city and stops at downtown landmarks such as Public Square, Playhouse Square, the Arcade and more. Tickets, $22.

Looking for a crash course in Cleveland history? Located at the Western Reserve Historical Society in the University Circle museum district, the Cleveland History Center’s “Cleveland Starts Here” exhibit tells the stories of the triumphs and tragedies that define Cleveland. Open Friday-Sunday. Admission, $6-$12.

Open since 1912, this public market is recognized as one of the best in the nation. For an “only in Cleveland” eating experience, be sure to snack on a smokie from Czuchraj Meats, bite into a bratwurst sandwich from Frank’s and chow down on a cannoli from Theresa’s Bakery.

Hyde Park has become a dining destination among the city’s professional athletes and the restaurant has obliged in kind by naming several dishes on the menu after a few fan favorites. At the Westlake and Beachwood locations, be sure to order the Baker Mayfield: a filet mignon topped with cracked peppercorns and cognac bordelaise.

Ask Browns fans to name the team’s greatest quarterback of their lifetime and most will probably tell you it’s Bernie Kosar. A native of nearby Boardman, Kosar led the Browns to three AFC Championship games in the late 1980s. His restaurant, located at the MGM Northfield Park casino, features walls of memorabilia from that era and serves fine steaks and fresh seafood.

You’ll find many excellent microbreweries in Cleveland, but Great Lakes was the first craft brewery in the state and remains one of the best. It’s home to award-winning beers like the Burning River Pale Ale and Dortmunder Gold Lager. Though the 73 Kolsh, a collab with Browns legend Joe Thomas, isn’t in season, the baseball-inspired Rally Drum Premium Lager is sure to put you in a sporty mood.

Rock and Roll Hall of Fame

Cleveland’s top tourist attraction just opened a new exhibit in concert with the NFL. “The Biggest Show on Turf: 55 Years of Halftime Shows” celebrates the dynamic history and awesome spectacle of the Super Bowl halftime show. The display includes stage costumes, instruments and set pieces from some of the most memorable performances including The Weeknd’s infinity mirror set from the most recent game and “Left Shark” from Katy Perry’s performance at Super Bowl XLIX. Admission, $18-28.

If you come to Northeast Ohio without visiting Canton, the birthplace of the league that eventually became the NFL, are you really a football fan? Luckily, the museum is offering extending hours during draft weekend to make sure you don’t miss anything in the 118,000-sq. ft. exhibition space. The highlight, of course, is the Hall of Fame Gallery, which features 326 bronze busts of the game’s greatest players, coaches and executives. Admission, $21-$28.

The city’s 183-acre zoo is home to thousands of animals representing hundreds of species including the real-life versions of several NFL mascots like Bears, Lions, Falcons, Eagles and Ravens. There are no Bengals on display, but the zoo did recently welcome three very cute tiger cubs as its newest residents. Tickets, $11.95-$23.

If you haven’t been to Cleveland’s No. 1 entertainment venue lately, you haven’t been to Rocket Mortgage FieldHouse. The arena underwent a $185 million renovation in 2019. The Cavaliers, led by young NBA stars-in-the-making Collin Sexton and Darius Garland, play back-to-back games this weekend, hosting the Wizards on Friday and the Heat on Saturday. Tickets start at $18.

No trip to Cleveland is complete without a photo in front of one of those iconic script Cleveland signs you’ve no doubt seen on Instagram. There are actually five of them scattered around town, each with a unique, screensaver-ready background. You can find them at:

The Flats at the Foundry Community Rowing and Sailing Center, 1831 Columbus Road

• Also see: NFL Draft in Cleveland: 12 can’t-miss things to do while you’re in town