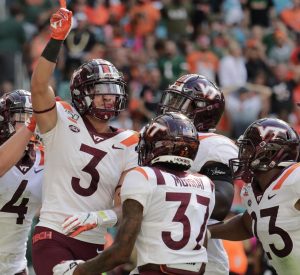 That hasn’t stopped numerous teams from doing extensive homework on the shutdown corner, including the Arizona Cardinals, Las Vegas Raiders and Cleveland Browns, per Albert Breer of Sports Illustrated on Wednesday.

“I don’t know what the Cardinals’ medicals are on Farley. I don’t know what the Raiders’ medicals are on Farley. I do know that other teams are hearing that those two—Arizona and Vegas—have done a lot of work on the ex-Virginia Tech star. So if he slides past those teams at 16 and 17? He could be waiting a while. (Cleveland’s another team that I’ve heard is diving deep on Farley; the Browns pick 26th.).”

The B/R NFL Scouting Department ranks Farley as the fourth overall cornerback prospect and the 25th-best player overall in the 2021 NFL draft class.

“Following Virginia Tech’s pro day, which he sat out because of the second surgery, Farley said at a media conference on March 26 that he originally was injured while deadlifting in early 2019, herniating his L5 disc and bulging his S1 joint—the spinal motion segment at the base of the lumbar spine that helps transfer loads into the pelvis and legs.

“He battled sciatica (pain that radiates along the sciatic nerve through the hips and buttocks and down each leg) throughout his first-team all-ACC season in 2019, eventually missing the Hokies’ last two games, and underwent a discectomy in February 2020 to remove a small part of bone. He recovered and resumed training, but opted out of the 2020 season because of COVID-19 concerns and to prepare for the draft.

“Then, Farley says, he irritated the S1 joint a couple of months ago, leading to the second microdiscectomy last month. Farley still has some weakness in one of his big toes, suggesting a nerve hasn’t fully recovered since the latest procedure, but that’s normal at this stage of recovery, which is ongoing.”

Despite the injuries, Farley’s agent, Drew Rosenhaus, told Pelissero and Rapoport that he believes Farley will not fall out of the top 20.

In addition to the aforementioned teams that Breer mentioned, Peter King of NBC Sports also noted that the Washington Football Team, the Chicago Bears and Pittsburgh Steelers “have spent lots of Zoom time with Farley this spring.”

There’s no denying that Farley is a tremendous talent. He defended an ACC-high 16 passes and registered four interceptions in 2019 despite missing the final two games of the season with an injury.

Farley is also a plus-size cornerback at 6’2″ and 197 pounds, which undoubtedly has teams interested.

We’ll soon find out where Farley lands with the NFL draft set to kick off from Cleveland on Thursday.