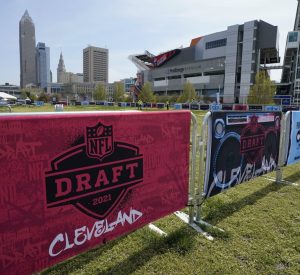 The city was forced to undergo a transformation that took decades and was significantly spurred by the achievements of its three major-league sports franchises: The Indians, Cavaliers and Browns. For most of the last 60 years, the football team reigned, establishing an everlasting foothold that has strongly cemented Cleveland as a football town.

Cleveland rose and fell with its Browns, especially in the 1980s, which began with a thrilling squad that came to be known as the “Kardiac Kids” because of its penchant for last-second, heart-stopping victories. By the middle of the decade, the Browns landed an Ohio kid at quarterback — Boardman native Bernie Kosar — who guided the team to three AFC title games in a four-year span.

As a city, Cleveland began its own transformation around that time, landing the Rock and Roll Hall of Fame along the shore of Lake Erie and building a new two-sport venue complex at the downtown doorstep known as Gateway. The Indians reversed decades of misery almost as soon as they moved in, reaching the World Series twice in three years, and the city hosted both the MLB and NBA All-Star Games in 1997. Cleveland’s Flats entertainment district made an aggressive comeback, and with baseball’s most fearsome lineup of that era selling out Jacobs Field on a nightly basis, downtown Cleveland became a place to be.

But during that resurgent stretch in the latter half of the ’90s, one thing was missing: the beloved Browns.

The city’s football team — kings of Cleveland from its historic first decade of existence through 1995 — was gone, having packed up and moved to Baltimore. No Sunday tailgating, no crowd roaring and barking in unison, no professional football in a storied football city.

By the time the Browns were resurrected in 1999, they had had missed the wave. Cleveland’s progress waned near the turn of the century, as the Indians had been sold and embarked on a frugal (and often fruitless) path toward contention. Their Gateway neighbors, the Cavaliers, took up the mantle as the city’s top team with the arrival of Akron native LeBron James. All the while, the Browns listed in the abyss of irrelevance, unable to assemble a quality football team.

From 1999 through 2019, the Browns posted a grand total of two winning seasons. They made one postseason, losing in spectacularly painful fashion to the rival Steelers in January of 2003. A franchise with a rich history — boasting four NFL titles and eight total championships — became a complete laughingstock.

“The history on the Browns and football in Cleveland is going to have a lot of different chapters,” Jim Donovan, longtime Browns play-by-play broadcaster and WKYC-TV sports anchor, told NFL.com. “There’s going to be a sad chapter, when the team moved. There’s going to be a real hard chapter of coming back in 1999 and being as bare bones of an expansion team as you could possibly be. Because I think we were all so naïve. Let me tell you, I was at the head of the class in that. When they came back in 1999, I just said, ‘This is going to be easy. We’ll be right back, it might take a year, but we’ll be right back there.’ But God almighty, it’s taken so long.”